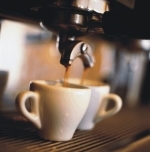 by Lynn Shapiro, Writer
The recipe to recover more quickly from exercise might be: finish workout, eat pasta and wash down with five or six cups of strong coffee, according to a new study published by The American Physiological Society. This is because glycogen, the muscle's primary fuel source during exercise, is replenished more rapidly when athletes ingest both carbohydrates and caffeine following exhaustive exercise, researchers have found.

Those athletes who ingested caffeine with carbohydrate had 66% more glycogen in their muscles four hours after finishing intense, glycogen-depleting exercise, compared to when they consumed carbohydrates alone.

It has already been established that consuming carbohydrates and caffeine prior to and during exercise improves a variety of athletic performances. This is the first study to show that caffeine combined with carbohydrates following exercise can help refuel the muscle faster.

"If you have 66 percent more fuel for the next day's training or competition, there is absolutely no question you will go father or faster," said John A Hawley, a researcher at the Royal Melbourne Institute of Technology University in Victoria, Australia and the study's senior author.

Caffeine is present in common foods and beverages, including coffee, tea, chocolate and cola drinks, he notes.

The study was conducted on seven well-trained endurance cyclists who participated in four sessions. The participants first rode a cycle ergometer until exhaustion and then consumed a low-carbohydrate dinner before going home. This exercise bout was designed to reduce the athletes' muscle glycogen stores prior to the experimental trial the next day.

The athletes did not eat again until they returned to the lab the next day for the second session when they again cycled until exhaustion. They ingested a drink that contained carbohydrate alone or carbohydrate plus caffeine and rested in the lab for four hours.

During this post-exercise rest time, the researchers took several muscle biopsies and multiple blood samples to measure the amount of glycogen being replenished in the muscle, along with the concentrations of glucose-regulating metabolites and hormones in the blood, including glucose and insulin.

The entire two-session process was repeated 7 to 10 days later. The only difference was that this time, the athletes drank the beverage that they had not consumed in the previous trial. That is, if they drank the carbohydrate alone in the first trial, they drank the carb plus caffeine in the second trial and vice versa.

The drinks looked, smelled and tasted the same and both contained the same amount of carbohydrate. Neither the researchers nor the cyclists knew which regimen they were receiving.

The researchers found the following:
-One hour after exercise, muscle glycogen levels had replenished to the same extent whether or not the athlete had the drink containing carbohydrate and caffeine or carbohydrate only.
-Four hours after exercise, the drink containing caffeine resulted in 66 percent higher glycogen levels compared to the carbohydrate-only drink.
-Throughout the four-hour recovery period, the caffeinated drink resulted in higher levels of blood glucose and plasma insulin.
-Several signaling proteins believed to play a role in glucose transport into the muscle were elevated to a greater extent after the athletes ingested the carbohydrate-plus-caffeine drink.

Dr. Hawley said it is not yet clear how caffeine aids in facilitating glucose uptake from the blood into the muscles. However, the higher circulating blood glucose and insulin levels were likely to be a factor. In addition, caffeine may increase the activity of several signaling enzymes, including the calcium-dependent protein kinase and protein kinase B, which have roles in muscle glucose uptake during and after exercise.

Lower Dose is the Next Step

In this study, researchers used a high dose of caffeine. However, because caffeine can have potentially negative effects, such as disturbing sleep or causing jitters, the next step is to determine whether smaller doses could accomplish the same goal.

Dr. Hawley pointed out that caffeine ingestion affects each individual differently so athletes who want to incorporate caffeine into their workouts should experiment during training sessions well in advance of an important competition to find out what works for them.