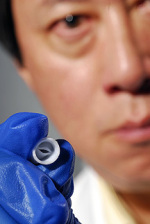 by Lynn Shapiro, Writer
Engineers at the Georgia Institute of Technology have developed a prosthetic vein valve made from a biomaterial they have patented, called cryogel and trade named "Salubria." Its name is derived from the Latin words for "safe" and "healthy."

Georgia Tech researchers are hopeful the new valve will help improve the lives of patients suffering from a cosmetically ugly and physically dangerous condition known as chronic venous insufficiency.

"The condition occurs when valves in a person's veins can no longer ensure a one-way flow of blood back to the heart. The loss of the valve leaflets allows blood to flow the wrong way, causing swelling in the legs and ankles. The condition affects more than seven million people in the U.S. alone and 400,000 patients globally," says lead inventor Dr. David Ku, a professor of mechanical engineering at Georgia Tech and a professor of surgery at Emory University.

Dr. Ku tells DOTmed News that chronic venous insufficiency is a condition that causes swelling and in the worst cases, blood clots, ulcers and infections in the leg. The infections may be life threatening.

"Current therapy for the condition includes anticoagulants, bed rest and compression hosiery, which targets symptoms rather than the cause," Dr. Ku says. "Damaged vein valves can sometimes be repaired but when that isn't possible, some surgical options are available to replace deep venous valves, such as valve transplantation," he says.

However, he adds, previous studies have shown that even when a donor valve is found, implanting it can cause significant trauma to the leg. Replacing the valve with a prosthetic one is likely the better option, but most have demonstrated poor clinical potential for human beings," Dr. Ku says.

Dr Ku believes that the valve he and his collaborators have developed will overcome previous difficulties. This month, his research team began conducting preclinical trials at Emory University to test valve's in vivo biocompatibility and performance.

Cryogel, made of polyvinyl alcohol, has a high water content, so it is biocompatible with human tissue. What's more, it's an organic polymer, unlike silicone, which is suspected of causing inflammatory disorders in breast implant patients. And Salubria has enough elasticity and compliance that it will pulsate in rhythm with the heart under normal physiological conditions.

Georgia Tech researchers have begun to conduct pre-clinical lab tests on the product. For instance, researchers noted that the venous valve met the mechanical design criterion--it could withstand pressure of more than 500 millimeters of mercury-- which matched physiologic vein valve function.

Detailed laboratory testing procedures and results were described in the June 2007 issue of the Journal of Medical Devices.

Next, the team developed a method to test whether blood clots would form inside the prosthetic valve. Results showed that the new generation of valves remained open with no clot formation after 120 minutes of blood flow, whereas control valves lined with polyester closed up after just six minutes of perfusion and showed blood cells adhering to the valves.

Georgia Tech is looking for a partner, preferably a medical device maker that produces catheters, to finance its clinical trials for chronic venous insufficiency.