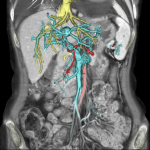 by Lynn Shapiro, Writer
Medicsight PLC, a subsidiary of MGT Capital Investments, Inc., and an industry leader in the development of Computer-Aided Detection (CAD) and image analysis software, today announced a global partnership with Ziosoft Inc., a leading developer of 3D advanced visualization and analysis technology. Combined Ziosoft-Medicsight products will focus on the detection of colorectal polyps.

Both companies are presenting their wares at the 94th Scientific Assembly and Annual Meeting of the Radiological Society of North America,being held in Chicago from November 30th until December 5th.

The companies are demonstrating the first results of the partnership at the Ziosoft booth (#7957).

They are working together to integrate Medicsight's ColonCAD with Ziosoft's Ziostation. The product is due for global launch early in 2009. U.S. launch will follow the product's clearance by the FDA, expected in early 2009.

David Sumner, Chief Executive of Medicsight, said "The partnership with Ziosoft is part of our ongoing strategy to build a broad base distribution channel, which will enable us to quickly penetrate global markets. Global demand for CT colonography looks set to increase dramatically, with clinical evidence such as the recently published U.S. National CT Colonography Trial (ACRIN 6664) demonstrating the positive benefits of CTC as a screening procedure for the early detection of colorectal cancer."

"This is the ideal time for Ziosoft to partner with Medicsight," said Mark Koeniguer, COO of Ziosoft. "There is great demand from the radiology community for intelligent software that will increase their productivity. The partnership will enable us to combine our revolutionary 3D imaging applications with the CAD and image analysis solutions of Medicsight to fulfill our company's goal, which is to meet the needs of any hospital."