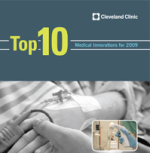 by Lynn Shapiro, Writer
Imagine if a simple blood test could detect recurrent cancer earlier, while also predicting a patient's prognosis, Cleveland Clinic physicians say. Or imagine if a device the size of two decks of cards could help a paraplegic breathe without a bulky ventilator. Or imagine if a machine could essentially keep harvested organs alive until they're transplanted in the recipient.

7. LESS and NOTES Applications: LESS (laparoendoscopic single-site surgery) takes laparoscopic surgery to an entirely new level by reducing the process to a small cut in the belly button. NOTES (natural orifice transluminal endoscopic surgery) bypasses normal laparoscopic incisions altogether. Instead, the surgeon gets to an appendix, prostate, kidney, or gallbladder through one of the body's natural cavities, such as the mouth, vagina, or colon.

6. New Strategies for Creating Vaccines for Avian Flu: A newer vaccine approach that uses a mock version of the bird virus called a virus-like particle (VLP) may offer a better solution to protect people against infection from the deadly avian virus.

5. Percutaneous Mitral Valve Regurgitation Repair: Using a tiny barbed, wishbone-shaped device, the heart is fixed non-surgically from the inside out. A catheter is carefully guided through the femoral artery in the groin, up to the heart's mitral valves. The clip on the tip of a catheter is then clamped on the center of the valve leaflets, which holds them together and quickly helps restore normal blood flow out through the leaflets.

4. Multi-Spectral Imaging Systems: The imaging system is attached to a standard microscope, where researchers can stain up to four proteins using different colors and look at tissue samples with 10 to 30 different wavelengths, allowing for the accumulation of more information than is currently available. This helps researchers to better understand the complicated signaling pathways in cancer cells, and to develop more targeted therapies, which might allow physicians to better personalize treatment for individual patients.

2. Warm Organ Perfusion Device: Once a heart becomes available for transplant, surgeons have just four hours before the organ begins to decay. The perfusion device recreates conditions within the body to keep the heart pumping for up to 12 hours.

1. Use of Circulating Tumor Cell Technology: A blood test that measures circulating tumor cells - cancer cells that have broken away from an existing tumor and entered the bloodstream - has the ability to detect recurrent cancer sooner, while also predicting how well treatment is working and the patient's probable outcome. The test results will allow physicians to better monitor a patient's progress, adjusting treatment if necessary.

"Four major criteria served as the basis for qualifying and selecting the Top 10 Medical Innovations. Nominated innovations were required to:

-- Have significant potential for short-term clinical impact (either a major improvement in patient benefit or an improved function that enhances healthcare delivery).
-- Have a high probability of success.
-- Be on the market or close to being introduced.

For more information about next year's Medical Innovation Summit and the conference agenda, visit http://www.clevelandclinic.org/innovations/summit/default.htm .