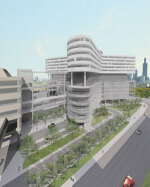 Metal Devices for Joint Replacement Are Loosened by Immune System

by Lynn Shapiro, Writer
Researchers at Rush University Medical Center have identified a key immunological defense reaction to the metals in joint replacement devices, which leads to loosening of the components and device failure.

Over 600,000 total joint replacements are performed in the United States each year. The vast majority are successful and last well over 10 years. But in up to 10 percent of patients, the metal components loosen, requiring the patient to undergo a second surgery.

The loosening is often caused by localized inflammation, an immune reaction to tiny particles of debris from the components themselves as they rub against one another. No infection is involved.

"As soon as joint replacement devices are implanted, they begin to corrode and wear away, releasing particles and ions that ultimately signal danger to the body's immune system," said Nadim Hallab, associate professor at Rush University Medical Center and the study author.

There are two different types of inflammatory pathways: one that reacts to foreign bodies like bacteria and viruses, which cause an infection, and another that reacts to "sterile" or non-living danger signals, including ultraviolet light and oxidative stress.

This is the first time that researchers have shown that debris and ions from implants trigger this danger-signaling pathway.

According to Hallab, when specialized cells of the immune system, called macrophages, encounter this metallic debris, they "engulf it in sacs called lysosomes and try to get rid of the debris by digesting it with enzymes." But the particles damage the lysosomes, Hallab said, "and the cells start screaming 'danger.'"

These danger signals are detected by large complexes of proteins, called inflammasomes. The inflammasomes mobilize, precipitating a chain of chemical events that cause inflammation.

The researchers are hopeful that identification of this molecular pathway that triggers inflammation without infection could lead to new and specific therapeutic strategies to avoid the early failure of joint replacements.