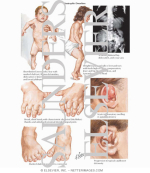 by Lynn Shapiro, Writer
According to a literature review published in the April issue of the Journal of the American Academy of Orthopaedic Surgeons (JAAOS), treating patients with dwarfism is an extremely complex process. Many treatments that are currently tried should be avoided while other measures are highly recommended, the authors say.

"With so many medical specialties involved, each needs to be aware of all of the symptoms of achondroplasia," says study co-author Eric D. Shirley, M.D, lieutenant commander, Medical Corps, United States Navy, and attending pediatric orthopaedic surgeon, Naval Medical Center Portsmouth, Portsmouth, VA. "Many of these conditions are interrelated."

Similarly, many children with achondroplasia may also develop thoracolumbar kyphosis. This can be seen when a child seems to slump forward instead of sitting upright. It often diminishes as the child learns to walk, but if it does not, it can result in a severe curvature of the spine and other medical and skeletal conditions.

Early interventions such as bracing and increasing one's trunk strength (this is done by keeping a child supported when seated) and in some cases spinal fusion surgery, may be required to ensure that the child can sit and walk properly.

"Quality of life is an important issue for people with achondroplasia," Dr. Shirley says. "This is why early and comprehensive treatment is so important."

Globally, achondroplasia is the most common form of skeletal dysplasia occurring at a rate of 1 in 30,000 live births annually. The condition is characterized by short stature along with several medical problems often related to the skeletal deformities.

Because these manifestations may become symptomatic during childhood or adulthood, people with achondroplasia are treated by orthopaedic surgeons at various stages of their lives. Depending on the patient's individual symptoms, specialists in respiratory and neurological conditions may also provide treatment.