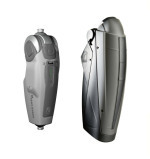 The device is the first to use sensors, artificial intelligence and actuators to provide amputees with the ability to walk naturally and safely "without even thinking about it," the company says.

In 2006, working in partnership with Victhom Human Bionics, Ossur introduced the first-generation prosthetic knee, used mostly within the Department of Defense and the Veterans Healthcare Administration.

"The second generation is smaller, sleeker, quieter, lighter and is expected to become widely used by both unilateral and dual amputees," said Lt. Col. (Dr.) Paul F. Pasquina, chief, Integrated Department of Orthopaedics and Rehabilitation at Walter Reed and the National Naval Medical Center. A commercial release of the device is expected by 2010.

Gadson was serving in Baghdad in May 2007 when the truck he was riding in was struck by a bomb, leaving him on the side of the road bleeding and in and out of consciousness. Ten days later, he was flown to Walter Reed with first his left leg amputated, then his right.

"LTC Gadson was a leader on the football field at West Point. He was a leader to his battalion in combat. And he's been a leader in our rehabilitation environment," Dr. Pasquina said.

"It's sort of like driving a school bus and then someone puts you in a sports car," Gadson explained. "You still know how to drive, but it's quite a different feeling. I just hope this is a path for people to really expand their lives."

Actuator technology lets amputees walk simply by lifting their thigh muscles. They can walk up stairs, inclines and ramps and move from a sit to stand position with ease, Ossur said.