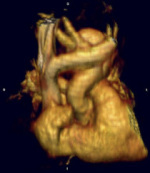 Radiation Dose Can Be Dramatically Slashed During Whole Chest MDCT

In addition, image quality was slightly better with prospective triggering, he said.

"As our study suggests, patients benefit from MDCT scans using ECG triggering because it delivers a much lower radiation dose-opening the utility of CT to more patients. This lower dose is particularly useful when non-specific indications suggest scanning of the whole chest, such as in the triple rule-out," Dr. Shuman said.

He noted that ERs face severe congestion and cost constraints in today's world, plus a need for accurate, swift diagnosis. Lower dose, high image quality ECG triggered CT will help significantly on all of those fronts," Dr. Shuman said.

This study appears in the June issue of the American Journal of Roentgenology.