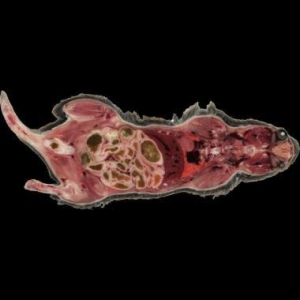 A cryo-imaged section of a mouse
New imaging technology using ultra-fine slices of frozen specimens could provide researchers with unprecedented levels of detail -- down to a single cell.

Dubbed cryo-imaging by its maker, David Wilson, PhD, a biomedical engineer at Case Western Reserve University, the device is in the prototype stage at his lab in Cleveland, Ohio.

According to Dr. Wilson, his modality -- so far only designed for animal studies -- can process an eye-opening 50-75 gigabytes of visual data, allowing experimenters to microscopically image an entire mouse.

The cryo-imaging system consists of a frozen-slicer, called a cryomicrotome; the bright field and fluorescent microscopes for imaging; a robotic positioner for holding everything in place; and analysis software that "allows us to interact with these enormous datasets and display a mouse on the screen and zoom in on a organ, zoom in further to a tissue, and zoom in all the way to a single cell," says Dr. Wilson.

To cryo-image a mouse, first the animal is euthanized. Next, it is snap frozen in liquid nitrogen and then placed under the cryomicrotome where it's sectioned into ultra-skinny slices only 10-micrometers thick -- about one-tenth the width of a strand of human hair. Images are then taken with a block face using both fluorescent technology, for single-cell resolution, and color bright-field imaging so the results can be seen in all their natural color.

In a statement issued yesterday by Case Western, James Basilion, MD, a radiologist and colleague of Dr. Wilson's, says the main advantage the technology offers is its level of resolution. "No longer do we need to 'guess' which cells are taking up agents from radiological biodistribution studies," he's quoted as saying. "We now can visualize them."

Dr. Wilson has founded a company, called BioInVision, to commercialize the device, a prototype now in its second generation. He has also published several papers on the technology, most recently in the Annals of Biomedical Engineering last month.