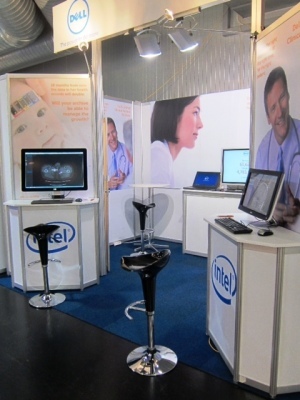 Sharing patient data and images across multiple sites in a hospital or health system has been a major challenge for health care. A combination of complex and proprietary PACS, EMR and other HIT systems make exchanging images and information difficult.

But companies who recognize the opportunity to solve this problem have been working to bring solutions to market.

One company DOTmed met at the European Congress of Radiology's annual meeting this past week is Dell, which recently unveiled its Unified Clinical Archive system. This vendor-neutral system standardizes data from any application and serves it up to users on a single platform.

"Right now and going forward, especially in light of the development of accountable care organizations, collaboration among physicians is the key but getting there is very difficult in an environment where information systems are not speaking to each other," Dan Trott, the Dell executive in charge of the undertaking, told attendees at ECR, which was held in Vienna.

Trott explained that when systems are siloed clinicians have to waste time searching for images or data scattered among different systems. But with Dell's unified system, patient data and diagnostic images can be delivered to any device at point of care, with the information pulled directly from the unified archiving system.

Trott pointed out that Dell's solution can reduce and eliminate the continuous workarounds that have burdened IT staffs for as long as anyone can remember, reducing such hassles as laborious and risky data migrations.

"This simplifies management, maintenance and general overhead for the department," added Eric van Hoff, who works with Dell's European division. "It also will help health care providers reduce the exploding costs of their medical archives."

Dell's system is offered both on site and via the cloud. The company said providers have several flexible levels of service and support depending on their outsourcing needs and disposition. So far, it has been deployed in several health care facilities in the United States and has a beta site in the UK.

One interesting and noteworthy booth accoutrement was a large computer screen which displayed a staggering number of actual patient image files going into the company's Unified Clinical Archive from its customer base in real time. It was humming.