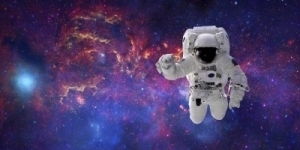 NASA astronaut in space
Exploding stars, cosmic rays, powerful particle forces —- these are all solar events that we're protected from on earth. But in space, radiation from these sources can affect us in significant ways.

According to Dr. Ann Kennedy, professor of radiation biology in the Department of Radiation Oncology at the Perelman School of Medicine at the University of Pennsylvania, the major type of radiation that's of concern is proton radiation. Kennedy is one of the team leaders appointed by the National Space Biomedical Research Institute (NSBRI), which works closely with NASA, to study the effects of radiation on astronauts for long-duration spaceflights that are expected to take place in the near future.

Penn Medicine's Roberts Proton Therapy Center — one of the ten proton facilities in operation around the country — is in many respects Kennedy's laboratory.

"Proton therapy, in a hospital like ours, is good at killing cancer cells. It's related to what we're doing now [with NSBRI] because it's primarily proton radiation that's a problem for the acute effects of radiation which come from solar particle events," Kennedy told DOTmed News.

During a cancer treatment session, protons are energized to specific velocities, which can then precisely target the cancer cells, leaving healthy tissue and vital organs untouched. Radiation without such accuracy is detrimental.

Currently, Kennedy and her fellow researchers are studying the effects of proton radiation on various animal species. They have focused on the skin first since it's a large organ that receives a significant amount of radiation during solar particle events, she said.

One of the effects they observed in the animals with irradiated skin is damage to internal organs, like the heart and lungs.

"It was surprising in our research that we saw such widespread effects from exposures that are primarily targeted to the skin," said Kennedy.

Although one of the major aims of Kennedy's research is to study radiation on astronauts in preparation for long-term explorations, Kennedy said her research has medical application on earth too. For instance, researchers are looking into developing countermeasures for interventional radiology procedures that give high doses of radiation to the skin, and cause areas beneath the skin to become necrotic.

Kennedy said her research could also be helpful in the event of a radiation spill or attack when people are exposed to high levels of radiation.

But the primary objective of Kennedy's research is to get ready for the extreme environments astronauts will face in space exploration class missions of the future. Other NSBRI teams are looking into additional space health concerns such as bone loss and muscle weakening, balance and orientation problems, neurobehavioral and psychosocial problems, radiation exposure, remote medical care and research capabilities, and habitability and performance issues during spaceflight.

Although no year has been set yet for sending astronauts to Mars, it's likely to be the first long-duration mission. "As I understand it, the plan is that we'll go there and it will be roughly half a year going and roughly half a year coming back and two years there," said Kennedy. NASA's rover Curiosity landed on the Red Planet in early August. It's expected to spend two years examining the terrain and collecting critical information about the large crater it now calls home.