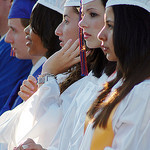 In today's economy, getting an education doesn't guarantee a job. That fact holds true even for advanced fields like nuclear medicine, a new survey from the American Society of Radiologic Technologists suggests. Only 57.2 percent of nuclear medicine students found work in the field within six months after graduating in 2011, according to the newly released report.

Radiography students tend to fare better, with a job placement rate of 85 percent, but the survey did find that enrollment in radiography programs dropped 4.7 percent between 2011 and 2012.

"ASRT surveys have shown a tightening of the job market for radiologic technologists in recent years," said ASRT Director of Research John Culbertson, M.A., M.Ed. "Many factors have contributed to this period of oversupply, including the U.S. economic recession, uncertainty over health care reform legislation and declining exam reimbursement rates. Other factors that could affect the job market include population growth, advancements in technology, changes in exam orders and the efficiency of patient throughput."

Radiation therapy is one field in which numbers have remained positive in both enrollment and job placement. Enrollment saw a 16.5 percent jump between 2011 and 2012, and in 2011, graduates had an 86 percent job placement rate. Culbertson said the year-to-year variability in radiation enrollment rates may be due to admission cycles in relation to program length.

"The time lag between when a student first applies for a program and when he or she eventually becomes certified can take several years, and the job market can change dramatically during that time," Culbertson said.

But even with shifting numbers and an uncertain economy, the report suggests that the radiologic technology profession still attracts interest. Radiography program directors, for example, reported turning out about 16,323 qualified students in 2012. There were 15,675 radiography students total in 2012.