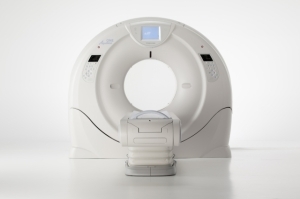 Toshiba's Aquilion One Vision Edition
A new study in the journal Radiology looks to new technology to narrow some of the concern around coronary CT angiography (CCTA), a procedure known to be clinically effective, but is sometimes controversial for fear of exposing patients to cancer risk down the road because of high radiation dose.

For the study, 107 patients underwent heart scans during CCTA procedures using Toshiba's Aquilion One Vision Edition, which has the advantage of a gantry rotation time of 275 milliseconds, automated exposure control, a larger X-ray power generator and 320 detector rows — giving it the title of 640-slice scanner. Analysis of the patients from National Institutes of Health researchers found that radiation exposure was reduced by as much as 95 percent compared to the current offering of CT scanners, which are normally 64-row detector scanners.

"These multiple advancements work together to allow us to image the entire heart within one heartbeat about 93 percent of the time," said lead study author Dr. Marcus Chen, in a statement from NIH.

More studies will need to be conducted before the system can be adopted for wider clinical use, said the statement.

Aquilion One Vision Edition was cleared by the U.S. Food and Drug Administration in September 2012 with only one U.S. install at the NIH. It's in use worldwide at Fujita Health University in Japan; Radboud University Nijmegen Medical Centre in the Netherlands; Monash Medical Centre Clayton, Southern Health in Australia; Hong Kong Sanatorium & Hospital in Hong Kong; and Iwate Medical University in Japan. Future installations include University Health Network-Toronto General Hospital in Canada and Rigshospitalet in Denmark.