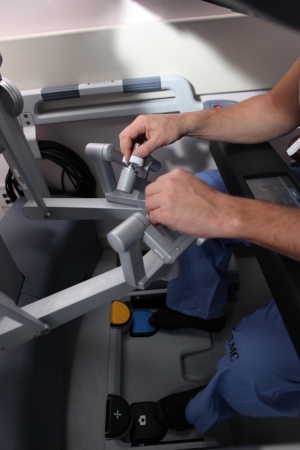 After performing 6,000 prostatectomies, Dr. Vipul Patel has more or less become one with his robot. No, he hasn’t been assimilated -- he’s simply the most experienced robotic surgeon in the world. For the last five years, Dr. Patel has sat behind a console at the Global Robotics Institute at Florida Hospital, directing the multiple “arms” of surgical robots as they slip into patients and perform minimally invasive surgery. When he started his career 10 years ago, robots were only just starting to arrive in operating rooms. Today, robots are everywhere in health care: 80 to 90 percent of prostatectomies are done through robot-assisted surgery, and the $2.4 billion medical robot industry is projected to be worth $8.5 billion by 2018.

“It’s not what we were expecting ten years ago,” says Patel. The Global Robotics Institute now hosts a total of 12 surgical robots, eight of which are used for surgical training.

Robots have made their way into other operating rooms, too, expanding from urology to gynecology, general surgery, cardiology, spine surgery and even neurology. Patients and surgeons alike enjoy the benefits the robots bring, and independent studies on their clinical value are finally beginning to appear, adding to the debate on whether they’re worth their considerable price tags.

Intuitive Surgical, the company that originally received FDA clearance for robotic surgery back in 2000, continues to lead the industry, with more than 2,400 installs to date. In its standard da Vinci robotic surgery system, the surgeon sits behind a console equipped with an image viewer providing a video feed and hand and foot controls for directing four robotic arms. The precision of the arms allows for carefully directed minimally invasive surgery, during which only a few keyhole-sized incisions are made in the patient. Like non-robotic minimally invasive surgery, the surgery tends to involve less blood, fewer post-operative complications and a quicker recovery time.

The FDA approved the latest da Vinci update, the “Single-Site” system for gall bladder surgery, in December 2011. It’s an add-on to the da Vinci robot that allows the robot to bring all of the instruments in through the navel, making only one incision. The system seeks to reduce the difficulty of performing single site laparoscopic surgery.

“In traditional laparoscopy when you move your hand left, the instrument pivots at the skin surface, and the tip of instrument moves right, and so you already have to re-map your head,” says Catherine Mohr, director of medical research at Intuitive Surgical. "In single site laparoscopy you have the added difficulty of crossing the instruments, so your right hand is controlling your left instrument. In da Vinci single site, the motion of the hand and the instrument are identical, which keeps it ‘intuitive.’”
1(current)
2
3
4