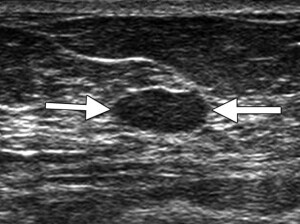 Breast ultrasound showing
9-mm benign mass.
(Courtesy RSNA)
A new study shows that slow-growing breast lesions classified as "probably benign" commonly found with ultrasound screenings can be safely re-evaluated in 12 months instead of being immediately followed up with unnecessary biopsies and exams.

Current guidelines suggest that such lesions should be followed up either with a biopsy or with a short-term follow-up, but some doctors now say this might be unnecessary.

A growing body of evidence suggests that ultrasound is an effective supplemental tool to find cancers that mammography can't.

However, ultrasound screenings have a downside: a high number of cancers detected by the modality are lesions at low-risk for turning into cancer — what doctors classify as BI-RADS 3.

Study researchers analyzed the screening of ultrasound exams and follow-up data of 2,662 women recruited between 2004 and 2006 in the American College of Radiology Imaging Network (ACRIN) trial.

Of all the trial participants, 745 low-risk lesions were detected by the screening, representing 25 percent of all ultrasound-detected lesions in the study.

However, of those 745 cases, only six were considered malignant — averaging a 0.8 percent malignancy rate overall.

Furthermore, of those six cases, suspicious changes in the cancer detected at the 12-month mark had not spread beyond the breast, meaning that the odds of these already-rare cases developing suspicious changes at the half-year mark were very low.

"Even though we waited a year to follow up, it didn't change the prognosis," said Barr.

Barr also cautions that because these lesions have always been automatically removed in the past, researchers still have incomplete data on these lesions and their long-term likelihood of developing into cancer.

"Though this study involved 2662 participants, we ended up with a very small number of cancers. We need larger studies that try this technique instead of short term follow-up to see if this is true," he said.

In recent years, cancer screening programs such as mammography have come under fire from critics who say that their high rate of false positives, unnecessary biopsies and overtreatment do more harm than good.

The conversation around overdiagnosis applies to more than just screenings: earlier this month a panel affiliated with the National Cancer Institute also came out with a recommendation to redefine cancer to rein in overtreatment and over-diagnosis for certain low-risk lesions — acknowledged by a growing chorus of doctors to be a real medical problem.

And with health care cost reduction dominating the conversation within the industry, ideas around curbing overtreatment are becoming more popular. "We can also make a significant impact on the cost of follow-up," said Barr.