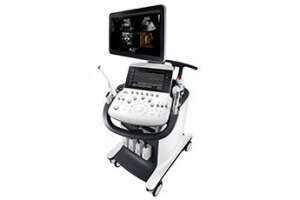 Samsung's UGEO WS80A,
the latest ultrasound for the OB/GYN space.
Samsung Medison, the medical device branch of Samsung Electronics, announced the debut of two new ultrasound systems that will eventually be launched here in the U.S.

Samsung's UGEO HM70A is a new high-end hand held ultrasound device intended for use in radiology, cardiology and in the OB/GYN space.

According to Samsung, both devices are available in Korea, Australia, many European countries and Southeast Asian countries this month. They will launch in the U.S. and Japan in the beginning of 2014.

As part of its growth strategy to become one of the major players in medical equipment alongside Philips Healthcare, GE Healthcare and Siemens Healthcare, Samsung's plan includes increasing its footprint in ultrasound products in addition to other diagnostic imaging equipment.

In 2010, Samsung acquired the ultrasound maker Medison, followed by Nexus and then most recently, NeuroLogica Corp., a company best known for its mobile CT scanners.

Both ultrasound devices are being showcased at the 23rd International Society of Ultrasound in Obstetrics and Gynecology World Congress, being held at the Sydney Convention and Exhibition Centre this week.