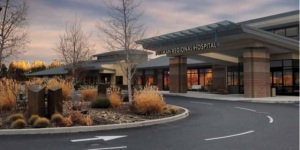 From the December 2013 issue of HealthCare Business News magazine

Pullman Regional Hospital’s chief financial officer Steven Febus has watched his facility go through its share of ups and downs during his 26 years there. He originally started out as a staff accountant and in his own words, “worked my way through the ranks,” eventually becoming CFO in 1995.

Located in the rolling hills of the Palouse in Pullman, Wash., the hospital has gone through many structural changes, including a failed collaboration with a nearby hospital in Moscow, Idaho, and a short-lived attempt to combine services under a subcompany of hospitals.

But now, the 25-bed hospital faces a new challenge: its critical-access designation, bestowed in 2004, is in danger of being revoked due to proposed budget cuts. Should this happen, its enhanced Medicare funding would be cut, impacting the facility’s ability to provide services to the community.

Pullman Regional Hospital didn’t meet all the federal requirements for critical-access certification, but in 2004 the state of Washington was able to deem it essential based on the Medicare/Medicaid population the hospital served, which makes up 40-45 percent of its patients, according to Febus.

But the hospital doesn’t just serve the elderly — it also overlooks Washington State University, one of the largest employers of the state. Should the hospital close down, it would leave a big gap in patient care for a college town full of young students as well. “That would be one of my first questions as a parent of a prospective student at this university, especially for elite athletes,” says Febus. He fears that the cuts will force the hospital to roll back major services his hospital offers today — including their critical care.

Pullman is just one of more than 800 small hospitals in the U.S. that could lose a portion of their Medicare funding under a proposal put forward in a report from the Department of Health and Human Services’ Office of the Inspector General. Critics say the proposal could put hundreds of hospitals out of business, potentially depriving communities with high levels of poverty and chronic illness access to health care — in other words, depriving the patients who need it the most.

President Obama’s proposed 2014 budget already makes Medicare reimbursement cuts to critical-access hospitals that have 25 or fewer beds. The proposal estimates that decertifying hospitals less than 10 miles from the next nearest hospital would cut off funding for 71 hospitals and save $40 million in 2014.
1(current)
2
3
4