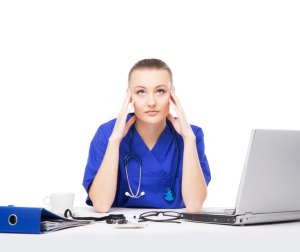 It’s well known that alert fatigue is a real problem for hospitals, but a recent study out of the University of Colorado shows just how much. The research uncovered that one system in the emergency department put out more than 123 unnecessary alerts to prevent one adverse drug event.

The study, recently published online in the journal Annals of Emergency Medicine, looked at the occurrences of adverse drug events among more than 4,500 patients who arrived in the emergency department at the University of Colorado Hospital in Denver every fifth day between September 2012 and January 2013.

The researchers found that overall, 98.9 percent of electronic health record (EHR) warnings for opioids did not result in actual or averted adverse events, and that more than 96 percent of those alerts were overridden by providers.

Overall, 46 alerts were accepted for 38 patients that averted a potential adverse drug event. However, in preventing those adverse events, 1,000 alerts were fired off, said lead study author Emma Genco, a research and clinical data analyst at the University of Colorado School of Medicine.

“This paper is saying this is really a problem and we need to fix it,” Genco told HCB News. “I would go down and shadow physicians to see their response. I would ask, ‘What is that alert for?’ and they had no idea.”

Out of the 4,581 patients included in the study, 14 experienced an adverse drug event (ADE), eight of them due to opioids. However, the study found that those were not preventable by the clinical decision support aspect of the hospital’s EHR system.

Genco said that it is important that clinical decision support alert systems are refined so that only clinically significant alerts are put out.

“EHR vendors are really reluctant to shut off these alerts for liability issues, but it really affects patient safety,” she added.

Research by David W. Bates, chief of the Division of General Internal Medicine at Brigham and Women's Hospital in Boston and a professor at Harvard Medical School, has shown that these clinical decision support systems could be modified to reduce alert fatigue while still minimizing liability issues for vendors.

“The facility can make the choice of which [alerts] they have on and which ones they don’t have on,” Bates told HCB News. “But, it’s a lot of work for these facilities to make some of these changes.”

Bates added that it would be helpful for a federal body to make recommendations on changes to alerts.

The situation may have even become more difficult. Bates' facility used to have a clinical decision support system that they built themselves, but recently implemented a commercial system, and providers have found it difficult to make the changes to alerts that they had made in the past.

“It’s hard to do that within the commercial systems that are available right now,” Bates said. “It’s possible the situation may have gotten worse.”