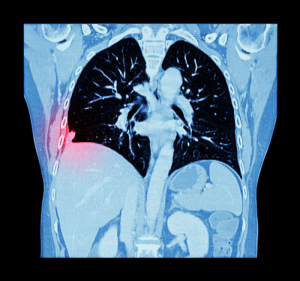 In different locations in the world, when it comes to lung cancer, men and women are not equal and may require different frequencies of screening for the disease.

A recent study investigated gender differences in newly developed lung cancer, and calculated the optimal CT screening intervals for both sexes. The biggest finding showed that men may need more recurrent screenings than women in Asia.

In fact, the average time between lung cancer being diagnosed on CT and the previous CT scan was much longer in women (5.6 years) than in men (3.6 years). Plus, the lung cancer stage at diagnosis hit men harder. Eighty-two percent of lung cancers in women were at stage 1, compared to just 49 percent in men.

“When we were doing our clinical practice, we usually encountered male lung cancer patients, while the cases of female lung cancer were not frequent,” Mi Young Kim told HCB News. She is a radiologist at Asan Medical Center, Seoul, South Korea. She also is the lead author of the study that was recently presented at the European Lung Cancer Conference (ELCC) in Geneva, Switzerland.

“Moreover, most of the female lung cancers were early stage. However, these findings might not be the same for different ethnicities or nations. Potential differences in other settings could be studied further,” she said.

The most important takeaway from the research, Kim said, is that optimal CT scan intervals for male and female patients should be considered, in order to reduce radiation exposure and cost.

In South Korea, the nationwide lung cancer screening with one year CT interval for high-risk groups will start soon, based on several well known prospective studies from European and U.S. study groups.

“We also agree to decide on a health care project based on the evidence. However, we experienced less advanced lung cancer in female patients in our study, and now we recommend a less frequent screening interval to reduce radiation and cost,” Kim said.

To suggest less frequent CT screening intervals to doctors or other health care providers, they would have to gather more information by further study. In the future, they may able to change the CT interval for female patients in nationwide lung cancer screening, Kim said. At this time, they can just provide their findings to facilitate further study.

“Most of the female patients were non-smokers (82 percent). Considering that smoking is a risk factor to develop lung cancer, the low incidence and less advanced stages in the female group in our study might be consequential,” Kim said, and added that in addition to genetic differences among ethnicities, smoking rates in different populations are likely to play a role.

“For more information, we will consider including survival rate and treatment methods in our study patients,” Kim added.