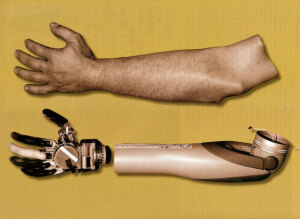 The realistic-looking
prosthesis is controlled naturally
Click to enlarge
An international team led by the Johns Hopkins University Applied Physics Laboratory (APL) in Laurel, Md., has developed a prototype of the first fully integrated prosthetic arm that can be controlled naturally, provide sensory feedback and allows for eight degrees of freedom-a level of control far beyond the current state of the art for prosthetic limbs. Proto 1, developed for the Defense Advanced Research Projects Agency (DARPA) Revolutionizing Prosthetics Program, is a complete limb system that also includes a virtual environment used for patient training, clinical configuration, and to record limb movements and control signals during clinical investigations.

The DARPA prosthetics program is an ambitious effort to provide the most advanced medical and rehabilitative technologies for military personnel injured in the line of duty. Over the last year, the APL-led Revolutionizing Prosthetics 2009 (RP 2009) team has worked to develop a prosthetic arm that will restore significant function and sensory perception of the natural limb. Proto 1 and its virtual environment system were delivered to DARPA ahead of schedule, and Proto 1 was fitted for clinical evaluations conducted by team partners at the Rehabilitation Institute of Chicago (RIC) in January and February.

"This progress represents the first major step in a very challenging program that spans four years and involves more than 30 partners, including government agencies, universities, and private firms from the United States, Europe, and Canada," says APL's Stuart Harshbarger, who leads the program. "The development of this first prototype within the first year of this program is a remarkable accomplishment by a highly talented and motivated team and serves as validation that we will be able to implement DARPA's vision to provide, by 2009, a mechanical arm that closely mimics the properties and sensory perception of a biological limb."

Making Use of Residual Nerves
The advanced degree of natural control and integrated sensory feedback demonstrated with Proto 1 are enabled by Targeted Muscle Reinnervation (TMR), a technique pioneered by Dr. Todd Kuiken at RIC that involves the transfer of residual nerves from an amputated limb to unused muscle regions in appropriate proximity to the injury. In this case, the nerves were transferred to the pectoral area of the patient's chest. This procedure provides for a more intuitive use of a prosthetic arm and allows for the natural sensation of grip strength and touch.
1(current)
2
3