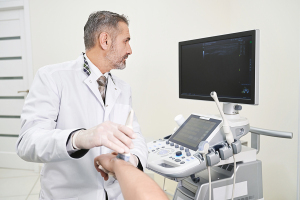 Cuts of up to $112 million in Medicare ultrasound reimbursements have organizations like the American College of Radiology calling for radiologists to clarify the actual costs of purchasing and servicing ultrasound equipment.

The group is asking clinicians to submit invoices in order to dispute the assessments of the Centers for Medicare & Medicaid Services in regard to direct practice expense inputs for equipment and supply pricing for ultrasound and vascular ultrasound rooms.

"Our efforts to educate CMS on the true cost of providing these services, and the adverse impact of such cuts on access to care, will be ineffective if radiologists, radiology business managers and other ultrasound providers do not supply recent invoices,” said ACR chief executive officer William T. Thorwarth Jr., in a statement. “Please send such invoices to the ACR now.”

Pricing for ultrasound equipment, as well as service cost, varies, and is based on what areas of healthcare each type is used in. A premium ultrasound for cardiac procedures ranges around $160,000, whereas one for the general market costs about $130,000. Compact portables for cardiac are about $75,000, compared to ones for general procedures which run a wide gamut from about $50-$60,000.

Despite these differences, all costs are dropping, according to Cassandra N. Gipson, a clinical analyst for MD Buyline. “They are trending down because with the reimbursement for radiology going down, they’re making the systems smaller but more economical,” she told HCB News. “Sometimes, just to get a sale, they put up a promotional discount just to get them out.”

The drop in reimbursement can also be attributed to the emergence of the composite reimbursements, in which providers are paid a sum for performing two or more procedures in one go. “Before, if you’d go in and have an ultrasound and biopsy, they’d charge us for both. Now, you can go and get paid full price for one and half price for another, or possibly two,” James Laskaris, also a clinical analyst for MD Buyline, told HCB News. “They would say you’re doing this procedure all in one shot, so we’re not going to give you X+Y. We’re going to give you Z which is the composite code. That’s some of the focus that they’re looking at when you combine one procedure with others.”

He adds that the process for determining reimbursements is always subject to public scrutiny. “CMS does a track record of what it actually costs to use a system. Then, when it says we’re going to drop reimbursement by X amount, they put it out to the public and ask if anyone can prove that cost is not going down. That’s where we are right now. It’s out to the public. The notifications are coming out. It’s up to the facilities to prove that their costs are either stable or going up. At the end, they’ll negotiate it back and forth, and come to some sort of happy medium.”

Initially set to launch Jan. 1, 2019, the reimbursement drop was delayed by the efforts of the ACR, as well as other organizations, such as the Ultrasound Access Coalition (UAC) and the Radiology Business Management Association (RBMA). If evidence of more up-to-date costs cannot be shown to CMS, the cuts could go into effect as early as 2020.

Like ACR, both UAC and RBMA are also asking for invoices as proof of the actual costs for purchasing ultrasound, and plan to work with a number of stakeholders to ensure clinicians are properly reimbursed for critical, life-saving ultrasound services.

“It is extremely important that we provide CMS with hard evidence as to the price paid for ultrasound equipment and all its components so that reimbursement for these services can be accurately calculated,” Linda A. Wilgus, executive director of Northwest Radiology Network and chair of the RBMA Federal Affairs Committee, said in a statement. “Due to our strength in numbers and diversity of practice composition, RBMA members are uniquely qualified to assist.”