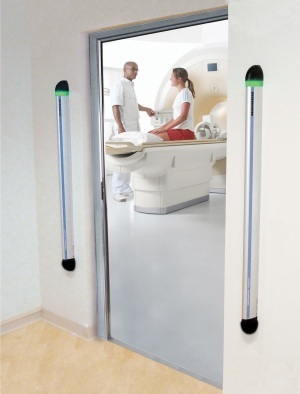 Many providers use wall mounted ferromagnetic detectors, like the Ferroguard Assure, planted in Zone 3, right outside the magnet room. Photo courtesy: Metrasens
From the October 2019 issue of HealthCare Business News magazine

A quarter of MR safety events result from the presence of unintended internal and external ferromagnetic objects brought into the scanning room. That was the consensus arrived at by researchers from the Pennsylvania Patient Safety Authority, who identified more than 1,100 such events submitted to its reporting system between 2009 and 2017.

At its core, an MR system is an extremely powerful magnet, so objects entering the room can cause serious problems. In many cases, that can include patient implants, such as defibrillators and pacemakers.

“Out of the three million Patient Safety Organization (PSO) reports we took in, we found 2,000 related to MR just in basic research,” Jason Launders, director of operations health devices at ECRI. “Of those, about 1,000 appeared to be MR safety incidents. The number of times the report said the patient specified having no implants, only for such a device to be found when they entered the room, or underwent further screening with a detector was concerning.”

The frequency at which these events take place calls for technologies that not only prevent these incidents but enhance awareness about the potential for them. One common solution is ferromagnetic (FM) detectors, which can detect and alert providers to the presence of ferromagnetic materials on a patient, or in their possession. But detectors are not an all-in-one solution; they require enforced protocols for instilling a culture of safety within the MR suite.

Smarter tool, stricter protocols
Many experts encourage MR providers to adopt at least two detectors at different locations to double-check patients, as well as unsuspecting staff members who may try to enter the scanning area with magnetic objects.

“Our Ferroguard Screener is used as the final step in the patient screening process and should be located in Zone 2, close to the patient changing area,” said Colin Robertson, senior vice president of detector manufacturing company, Metrasens. “Our Ferroguard Assure detector is wall-mounted, usually immediately outside the magnet room door, in Zone 3.”

The presence of these detectors, both for the entryway and pre-screening process, can help reduce the number of adverse events that take place while also teaching providers how to improve their screening processes. Kopp Development's FerrAlert offers spatial recognition technology for identifying the location of ferromagnetic objects on the body, alerting providers to be aware of common areas to check during pre-screening where people may carry these objects.
1(current)
2
3
4