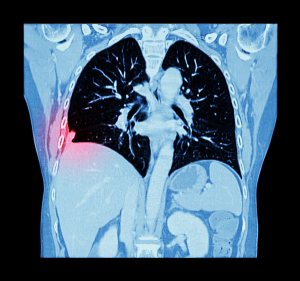 "I would not say the Medicare standard is flawed — the eligibility criteria for lung cancer screening CT were a major step forward to prevent lung cancer death," lead author Dr. Michael Lu, director of AI at Massachusetts General Hospital Cardiovascular Imaging Research Center (CIRC) and assistant professor of radiology at Harvard Medical School, told HCB News. "However there are limitations: they do not include about half of lung cancers and they require information (pack-year smoking history and years since quitting) that is often not available. People may not recall their smoking history accurately and there is variability in how peoples' lungs respond to smoking."

Medicare criteria are the current standard for determining who is eligible to undergo low-dose CT scans for lung cancer screening, and requires that patients be between 55 and 77, not show symptoms of lung cancer, be either a current smoker or former one who quit within the last 15 years, have a written order from a doctor, and a tobacco smoking history of at least 30 “pack years” which is an average of one pack (20 cigarettes) per day for 30 years.

This standard, however, misses most cancers. And while able to prevent death from lung cancer, screenings with chest CT lag behind other screening tests, with less than 5% of people eligible for screening estimated to undergo it.

The researchers initially trained the CXR-LC model using chest X-rays from 41,856 people who were part of a large multicenter trial of lung cancer screening with chest X-rays (prostate, lung, colorectal and ovarian (PLCO) cancer screening trial). They also incorporated basic demographic data commonly available in EHRs such as age, sex, and current smoking status. The final model was validated in 5,615 additional PLCO participants and 5,493 patients who were part of the National Lung Screening Trial (NLST).

The model missed 30.7% fewer lung cancers than the Medicare lung cancer screening criteria while screening the same number of people.

"The hope is that AI models like CXR-LC can get more appropriately high-risk people into the screening pipeline, to prevent lung cancer death," said Lu. "My hope is that these technologies will also save physicians time that they can redirect toward their patients."

The findings were published in Annals of Internal Medicine.