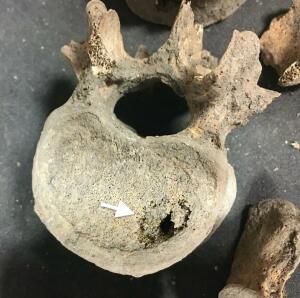 In a first-of-its-kind study published this week in the ACS journal Cancer, a team from Cambridge University used radiological imaging to examine the interior of 143 skeletal remains recovered from six burial sites within the vicinity of Cambridgeshire, U.K. Prior research into preindustrial cancer has been limited to analysis of lesions found on the exterior of ancient bone fragments.

"The majority of cancers form in soft tissue organs long since degraded in medieval remains. Only some cancer spreads to bone, and of these only a few are visible on its surface, so we searched within the bone for signs of malignancy," lead author Dr. Piers Mitchell said in a statement.

Based on the evidence obtained from the sample of 96 male and 46 female adult subjects (the sex of one could not be determined) the researchers estimated the prevalence of adults in medieval England who had cancer metastases to bone at the time of their deaths.

Bone metastases were present in five of the 143 samples. Taking into account that a CT scan is unable to detect 25% of bone metastases. And while assuming that the rate of detection was unhindered by the age and condition of their samples, the researchers estimated that 4.7% of adults had bone metastases at death, in the region.

In light of the fact that roughly one-third to one-half of diagnosed cancer today will metastasize to bone, along with other relevant data, the authors estimate that a minimum of 9% to 14% of adults in medieval England had cancer at the time of their deaths.

“Our comparison of the medieval data with the prevalence of cancer during the 20th century indicates that cancer prevalence increased during the intervening period. If it has changed from 9% to 14% of adults in the medieval period to 40% to 50% in modern times, this raises the question as to whether it will continue to increase in prevalence in the future,” concluded the study’s authors.

Prior analysis of ancient remains had contributed to the popularity of the idea that cancer in the preindustrial world was vanishingly rare and more significantly a product of smoking, industrial pollution, and other realities of modern life. The low detection of malignancies based on more cursory examination of ancient bone fragments led some to conclude that cancer, among other diseases, was virtually absent prior to industrialization.

The average life expectancy in medieval England has been estimated to have been around 24 to 33 years, prior to when cancer develops in the vast majority of cases today.

The research underway in Cambridge is part of a larger initiative called After the Plague. The multidisciplinary research project focuses on the St. John's Hospital cemetery, a medieval burial ground excavated by the Cambridge Archaeological Unit in 2010 with an aim to learn more about health, life, and death among the medieval urban poor — particularly during the bubonic plague epidemic, known as the Black Death.