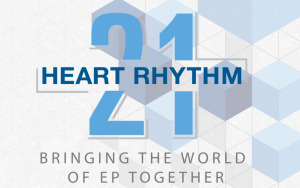 Already on Monday morning, when the first exhibitors started moving in, it was clear that this year’s Heart Rhythm Society (HRS) Scientific Sessions (already pushed from the Spring) were going to be a bit different. While the large industry players were busy building their monster exhibits, the busy entrepreneurs in smaller exhibit spaces were few and far between. Besides, exhibitors had already been limited in number of staff they could bring to the conference, hinting at a somewhat reduced number of visitors as well.

Reduced participation
In the end, HRS 2021 participation was greatly reduced compared to past years. On the conference floor, we heard a common story: Many hospitals and labs are still under economic pressure, clinicians and allied professionals are still hesitant to travel — and the large number of international participants that we normally see at HRS were almost entirely absent. The in-person activities of HRS 2021, held in the Boston Convention and Exhibition Center in the Seaport part of Boston and surrounded by high-end hotels and restaurants, was preceded by a virtual experience that kicked off in late June. While I commend the event organizers for adapting to the unpredictability of the pandemic with a hybrid format, it would be my hope that this virtual element would not be repeated in coming years. The true value of the annual convention and scientific sessions largely lies in the personal interaction, drop-by meetings and accidental conversations of the in-person experience. HRS 2022 is scheduled for April in San Francisco, and I hope we will be (sufficiently) back to normal for the in-person conference to be back in style and size.

Normally, this technology innovation is financed by the largest manufacturers in the industry — Biosense Webster (a Johnson & Johnson company), Abbott, Boston Scientific, and Medtronic. However, these industry giants rely on the constant innovation coming from skunk works, entrepreneurs, and scientists in smaller companies that showcase their innovation at HRS conferences and often end up being acquired by the large manufacturers. In this way, their technology gains commercial access and ultimately serves to improve treatments.