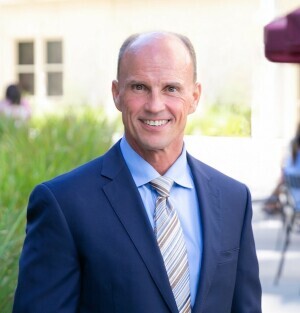 Rodney Hanners
LOS ANGELES — Rodney Hanners has been named CEO of Keck Medicine of USC and President and CEO of USC Health System. He has served as interim CEO since June 2020.

“We are thrilled that Rod will serve as CEO of Keck Medicine,” said Shapiro. “His visionary leadership and broad knowledge of the industry was certainly on display over the past year, where he skillfully and successfully led the health system throughout the pandemic. With him at the helm, we know the university’s medical enterprise will continue to set the standard for innovation and excellence.”

“Rod has contributed greatly to the success of USC’s medical enterprise, and I am delighted he has agreed to serve as CEO of Keck Medicine of USC,” USC President Carol L. Folt said. “He is committed to providing unparalleled patient care, being a strong advocate for our physicians and staff, and ensuring that Keck Medicine remains one of the leading medical centers in the country.”

Hanners helped lead Keck Medical Center to rank among the top 25 hospitals nationally and among the top 50 hospitals in the country in 12 medical specialties by U.S. News & World Report in the 2021-2022 Best Hospitals rankings.

During his tenure, Keck Hospital has received multiple “A” safety ratings from the watchdog organization the Leapfrog Group, and was awarded the 2020 Patient Safety Honor Roll award from the California Health and Human Services Agency, Hospital Quality Institute and Cal Hospital Compare.

Hanners was named Hospital CEO of the Year by the Los Angeles Business Journal in 2020 and received the 2020 Leadership in Healthcare Award from National Medical Fellowships.

Prior to joining Keck Medicine in 2015, Hanners served as senior vice president and chief operating officer for Children’s Hospital Los Angeles and helped the organization achieve a ranking of fifth in the nation by U.S News & World Report. He also held various positions in the Kaiser Permanente health system at the national, Southern California regional and medical center levels.

Before entering the health care field, Hanners was a naval officer in the United States Submarine Force and was selected as Junior Officer of the year for Submarine Group 5.