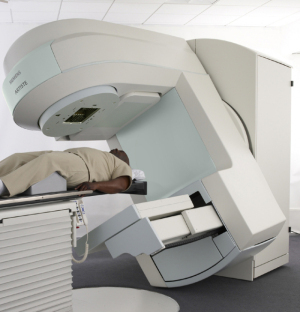 A linear accelerator
delivers image guided
radiation therapy.
Precisely targeted radiation therapy can eradicate all evidence of disease in selected patients with cancer that has spread to only a few sites, suggests the first published report from an ongoing clinical trial.

In the August 15, 2008 issue of Clinical Cancer Research, (published online August 12) researchers from the University of Chicago Medical Center report that targeted radiation therapy had completely controlled all signs of cancer in 21 percent of patients who had five or fewer sites of metastatic disease.

"This was proof of principle in patients who had failed the standard therapies and had few, if any, remaining options," said the study's senior author, Ralph Weichselbaum, MD, professor and chairman of radiation and cellular oncology at the University of Chicago Medical Center. "We had encouraging results, including several long-term survivors, in patients with stage-IV cancers that had spread to distant sites."

In some cases, surgeons have successfully treated such limited cancer spread, producing long-term survival by removing the primary cancer and one or two distant tumors, off-shoots of the original cancer--usually in the lung or liver. However, some patients are not fit for surgery or have cancer that is inoperable.

Recent improvements in tumor detection and precise image-guided radiation therapy, however, have made simultaneous treatment of multiple tumor sites with radiation feasible. So in 2004, Weichselbaum organized a clinical trial to test the ability of local radiation therapy to control a limited number of related tumors which colleague Joseph Salama, MD, assistant professor of radiation oncology at the University of Chicago has directed since 2005.

Patients with stage-IV cancer with one to five distant metastases and no tumors bigger than 10 centimeters (about four inches) in diameter were eligible to participate in the study either before or after chemotherapy treatment.

Each patient received three doses, separated by at least two days, of precisely targeted radiation therapy focused on each metastatic tumor. Treatment was usually completed within one week. The first patients in the study received lower doses. As few side effects were seen, radiation doses were gradually increased in subsequent groups of patients.
1(current)
2
3