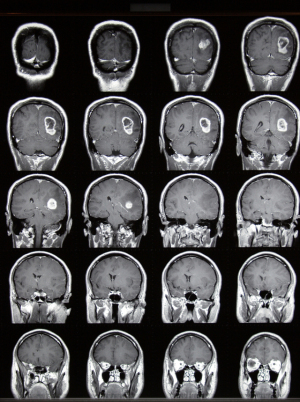 Researching the brain
for clues to PTSD
Brain scans given to veterans who recently served in Iraq and Afghanistan show that those suffering from post traumatic stress disorder (PTSD) develop distinct differences in their brain that cause memory impairment, says Florin Dolcos, M.D., an assistant professor of Psychiatry and Neuroscience at the University of Alberta in Edmonton, Canada.

The Duke study included 42 American soldiers (52 percent men). The two groups had been exposed to similar levels of combat.

One group of 22 men and women was suffering from PTSD and the other group of 20 was not. Duke scientists used functional magnetic resonance imaging scans to study the brain patterns of soldiers while they performed a three-part memory test that included distractions. The test measures the ability to stay focused, which is thought to be impaired in PTSD sufferers.

First, the soldiers saw pictures of three similar faces. After a delay to give their brains time to process this information, the soldiers saw a photograph of a face and had to press a button indicating whether the face was one of those they had seen earlier or whether it was new.

Then, the soldiers were randomly shown photos either of combat scenes from Iraq or Afghanistan as well as photos of non-combat scenes, such as a man playing the trombone, or digitally scrambled pictures showing nothing.

In an area of the brain involved in the ability to stay focused (the dorsal lateral prefrontal cortex), the scientists observed that while the group without PTSD was far more distracted by the traumatic photos than the non-violent ones, the patients suffering from post-traumatic stress disorder were equally distracted by both photos, whether they were violent or benign.

What's more, the PTSD group performed more poorly in identifying whether the final faces were new or old regardless of whether the photos that distracted them were violent or neutral, indicating that their memories were impaired.

"This sensitivity to neutral information is consistent with the PTSD symptom of hypervigilance, where those afflicted are on high alert for threats and are more distracted by not only threatening situations that remind them of the trauma, but also by benign situations," said the study's leader, Dr. Agenda Morey, an assistant professor of Psychiatry at Duke University and director of the neuroimaging lab at Durham Veterans Administration Medical Center. "This has not been seen at the brain level before," she says.

The researchers also found differences between the two groups in an area of the brain responsible for the sense of self. When the soldiers were shown the combat photos, an area of the brain called the medial prefrontal cortex, lit up brightly in the PTSD group, but less so in the non-PTSD group.

This is consistent with what researchers see in PTSD, where people with the disorder are much more likely than others to connect traumatic triggers to events that have increased personal relevance.

The researchers also found that the combat photos produced much greater activity in the brain region controlling emotion (the amygdala) in the PTSD group than in the control group, proving further that PTSD is an organic affliction.