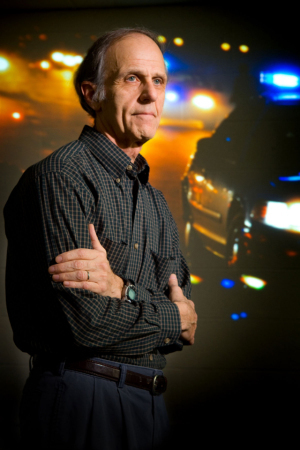 Researcher John Violanti
reveals heart risk among
America's finest
It is well documented that police officers have a higher risk of developing heart disease: the question is why.

"We took lifestyle factors that generally are associated with atherosclerosis, such as exercise, smoking, diet, etc., into account in our comparison between citizens and the police officers," said John Violanti, Ph.D., UB associate professor of social and preventive medicine, who has been studying the police force in Buffalo, N.Y., for 10 years.

"These lifestyle factors were statistically controlled for in the analysis. This led to the conclusion that it is not the 'usual' heart-disease-related risk factors that increase the risk in police officers. It is something else. We believe that 'something else' is the occupation of policing."

Results of the study appear in the June issue of the Journal of Occupational and Environmental Medicine.

Violanti and colleagues have been studying the role of cortisol, known as the "stress hormone," in these police officers to determine if stress is associated with physiological risk factors that can lead to serious health problems, such as diabetes and cardiovascular disease.

In a study accepted for publication in Psychiatry Research that looked at the male-female differences in stress and signs of heart disease, Violanti found that female police officers had higher levels of cortisol when they awoke, and the levels remained high throughout the day. Cortisol normally is highest in the morning and decreases to its lowest point in the evening.

"When cortisol becomes dysregulated due to chronic stress, it opens a person to disease," he said. "The body becomes physiologically unbalanced, organs are attacked and the immune system is compromised as well. It's unfortunate, but that's what stress does."