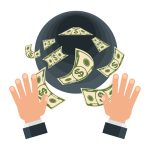 by Philip F. Jacobus, CEO
There is a great (and troubling) story in our news this week about waste in healthcare.