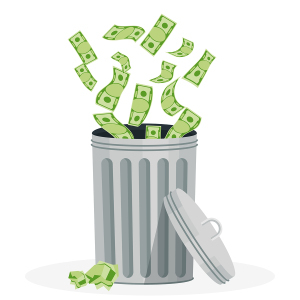 About one-quarter of the total amount spent on U.S. healthcare is waste, according to a new study.

Researchers at insurance firm Humana and the University of Pittsburgh Medical Center report that between $760 billion and $935 billion is wasted annually, and that initiatives to reduce waste could save a total cost range of $191 billion to $282 billion, adding up to a potential reduction of 25 percent.

“Implementation of effective measures to eliminate waste represents an opportunity to reduce the continued increases in U.S. health care expenditures,” said the authors in the study. “The United States spends more on health care than any other country, with costs approaching 18 percent of the gross domestic product (GDP) and more than $10,000 per individual.”

The Institute of Medicine proposed six categories in 2010 as potential sources of waste, deriving their findings from research it conducted to estimate the complete amount wasted in U.S. healthcare. These areas include administrative complexity, pricing failure, failure of care delivery, overtreatment or low-value care, fraud and abuse, and failure of care coordination.

Using government reports, articles and peer-reviewed publications from 2012 to 2019, the authors calculated total or ranges of estimated costs in these six groups.

For administrative complexity — consisting of waste in billing and coding, and time spent by physicians in reporting quality measures — the total estimated annual cost of waste was $265.6 billion. Pricing failure, which refers to price increases far from expectations in stable markets, ranged from $230.7 billion to $240.5 billion.

The authors defined failure of care delivery as poor execution or lack of widespread adoption of best care processes, and estimated its waste total between $102.4 billion and $165.7 billion. Overtreatment or low-value care waste was priced between $75.7 billion and $101.2 billion, and fraud and abuse between $58.5 billion and $83.9 billion. Failure of care coordination — referring to unnecessary admissions or avoidable complications and readmissions — ranged from $27.2 billion to $78.2 billion.

The authors claim that insurer-clinician partnerships and expansions in data interoperability can help save more in these areas. They acknowledge, however, that more research is required and that their work is limited by the fact that the studies they used may not take into account all costs and savings in each area of waste, and that data from some studies may not be generally applicable to the U.S. population.

“These findings highlight the challenges inherent in rapidly changing the course of a health system that accounts for more than $3.8 trillion in annual spending, 17.8 percent of the nation’s GDP,” said the authors.

The findings were published in JAMA: The Journal of the American Medical Association.