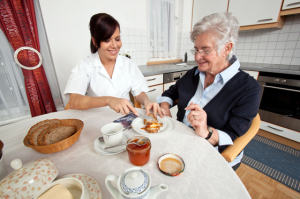 A just-published study in the Journal of General Internal Medicine puts a price tag on a medical practice concept first introduced in 1967 by pediatric doctors and reinvented under the Affordable Care Act (ACA) — the medical home.

“No one really had a good sense of what it actually costs to convert a (primary care) medical practice to a medical home,” Dr. Grant Martsolf, Ph.D., policy researcher at the RAND Corporation and lead author of the study, told HCB News. The $100,000 study was funded by the Agency for Healthcare Research & Quality, an arm of the U.S. Department of Health & Human Services (HHS), which oversees Medicare and Medicaid.

The study found that medical practices converting to a medical home model incurred median one time associated costs of $30,991, which is equivalent to an average of $9,814 per clinician. Median yearly ongoing costs for practices were $147,573, or $64,768 per clinician and $30 per patient.

“While these costs are not inconsequential, the response from the practices during the data review phase of the study was that they were surprised; the costs were lower than they expected,” said Martsolf.

However, he added that these costs could be a significant burden on smaller, independent practices, compared to physicians employed in a hospital-owned practice.

“A health system has a person or office tracking data and generating reports to share with the practice,” he said. “In a small practice that was part of the study, the lead doctor was doing that work.”

According to RAND, the study surveyed primary care practices that took part in the first three years of the Pennsylvania Chronic Care Initiative, a large multi-payor medical home pilot. Leaders from a dozen practices were asked about changes made as a result of the switch and the cost involved.

“A big chunk of the cost was in people time, hiring nurses, for example, to follow-up with patients as they discharged from the ER or hospital, or to get their A1C test (diabetes care),” said Martsolf. “Most of the practices reported that, under Meaningful Use financial incentives, they had already made or were in the process of making the investment in information technology (IT) systems before any switch to the medical home model.”

According to HHS, a medical home is a “cultivated partnership between the patient, family and primary care provider in cooperation with specialists and support from the community”. The intent is to maximize wellness to keep patients out of the hospital and improve quality of life. This concept is also commonly referred to as population management, which is a key component under the ACA to reduce health care costs.