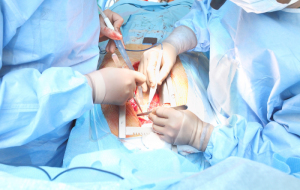 Heart disease shows no signs of slowing down as the leading cause of death worldwide, driven by the aging baby boomer generation, epidemics in obesity and diabetes, high blood pressure, smoking and unhealthy diets and lifestyles. Blocked coronary arteries, diseased heart valves, aortic aneurysms and dissections, and heart failure are just some of the reasons that 1.5 million people undergo open heart surgery each year, with a half million annually in the U.S. alone.

But the routineness of cardiac surgery belies its great technical complexity. To operate on the heart, the chest cavity is “cracked” open and the heart is then exposed and stopped. To keep the patient alive during surgery, the blood is diverted through a heart-lung machine that oxygenates and pumps blood to the rest of the body, in a process called cardiopulmonary bypass (CPB).

Then, over the course of many hours, cardiac surgeons often combine multiple surgical procedures such as valve replacement, coronary artery bypass grafting (CABG), aortic reconstruction and congenital defect repair to safely correct as many critical problems as they can in order to avoid future surgeries. Unfortunately, high-risk, complex cardiac surgery and long CPB times can generate a host of inflammatory toxins that can directly injure vital organs and contribute to serious postoperative complications such as acute kidney injury, failure to wean off of mechanical ventilation, circulatory collapse, risk of stroke and even death.

For example, patients undergoing aortic surgery have a 17 percent incidence of acute respiratory distress syndrome, one of the most severe forms of lung injury that can be fatal in up to 80 percent of cases following cardiac surgery. And up to 30 percent of cardiac surgery patients develop significant kidney injury, 1 to 2 percent of whom will require dialysis, increasing the risk of death eightfold. To avoid these dangerous complications, it is important to first understand how this inflammation occurs in cardiac surgery and what surgeons can do to prevent and treat it.