Surgeons Say Teo is Full of Himself

Surgeons Say Teo is Full of Himself 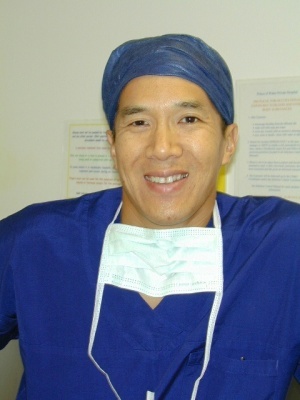 Dr. Charles Teo,
popular and controversial
Pediatric Neurosurgeon
in Sydney, Australia
(click to enlarge)
Dr. Charles Teo, a pediatric neurosurgeon at Sydney's Prince of Wales Private Hospital, has made numerous appearances on the Australian version of 60 Minutes, which airs on Channel 9. In his most recent appearance on May 27, 2007, he declared, "I think I'm the best," and proceeded to imply that he was the only one of Australia's 130 brain surgeons to be pioneering "keyhole surgery," which he demonstrated on the same program on Nathan Bonnici, a 12-year-old from whom he removed a tumor through a small hole above the eyebrow.

Some believe that the backlash against the bagpipe-playing Chinese-Australian is his motorcyclist personality, his wearing of Hawaiian shirts to work, and his development of personal relationships with his patients and their families. That he also resigned from the Neurosurgical Society of Australasia in 2003 is likely another factor, and part of his own image-building as a renegade and maverick.

Channel 9's introduction of Dr. Teo, who previously appeared on the program for removing the tumor of Chris O'Brien, a noted Australian oncologist, was, "It says a lot about Charlie Teo that he's prepared to stand up and fight, while his enemies run for cover."

In fact, it was 60 Minutes interviewer Peter Overton, who asked Teo point blank, "Are you the best, Charlie?" to elicit Teo's now-infamous response. In the story, Overton stated, "The tumour he wants to remove is intricately wrapped around the main arteries in Nathan's brain. Most surgeons wouldn't even attempt it. And that's why Charlie Teo is regarded with suspicion and even hostility by many of his peers -- he goes where others fear to tread." Later on, Overton claimed, "despite its success, Australian surgeons just aren't using it."

"The society is concerned that a recent media presentation may have caused the incorrect perception that the standard of neurosurgery available in Australia and New Zealand is not of the highest standard," wrote Dr. Eric Guazzo of Townsville Hospital, President of The Neurosurgical Society of Australasia, in an advertisement taking the form of an open letter. "The suggestion during the interview that there is a reluctance to use or that this type of surgery is not widely available in Australia and New Zealand is erroneous and disparages the professional skill and knowledge available." Guazzo describes Teo as nothing more than "a competent technical neurosurgeon."

"If it'd been some other neurosurgeon bringing keyhole surgery to Australia," Teo said to Overton, "maybe they would have had more luck. But, you know, it's Charlie Teo I think that they don't like. They're not giving it a fair chance."
1(current)
2
3

An A-eye on diabetes: What COVID-19 taught us about the importance of telemedicine and artificial intelligence