SIIM debate: Should enterprise imaging be a top priority?

SIIM debate: Should enterprise imaging be a top priority? 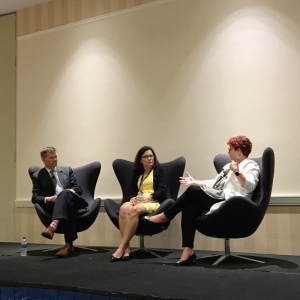 L to R: James Whitfill, Charlene Tomaselli
and Dr. Cheryl Petersilge
Johns Hopkins Medicine attempted to enact an enterprise imaging platform, but instead is “thriving” without one, while Cleveland Clinic has been leading the way with image sharing between numerous specialties throughout its sprawling healthcare system.

These two points of view were presented as part of a session, billed as a debate, titled “Should Enterprise Imaging Be a Top Strategic Initiative?” at the SIIM annual meeting in Maryland’s National Harbor.

Cheryl Petersilge, medical director of radiology for at Cleveland Clinic, said the fact that the radiology department was looking at a new PACS system and decided that the new system would be an enterprise resource, coupled with the chief information officer forging ahead with the initiative, helped move the adoption of an enterprise imaging system forward.

“For anyone who knows the Cleveland Clinic, it really is an enterprise-thinking organization,” Petersilge said. “Having an enterprise imaging archive really fit with the values of the organization.”

Charlene Tomaselli, director of medical imaging information technology for Johns Hopkins Hospital, said that while she had tried to get an enterprise imaging system up and running – they had even visited the Cleveland Clinic a few years ago to do research – it hadn’t worked out for a variety of reasons.

“I think because we’ve had such a collaborative IT team in radiology that services so many people outside radiology, everybody that I went to said, ‘Why do we need another team? We want your team to just take this on if we need to do it,’” Tomaselli said. “But I could not get any funding. … I think timing is everything. Now my chair is interested in AI and machine learning. That’s their focus, not ‘How can I get these photos into the medical record?’”

Tomaselli noted that the cardiology department at the Cleveland Clinic hasn’t yet signed on to the enterprise imaging system.

“I don’t know how you can say you really have true enterprise imaging when cardiology is a silo,” Tomaselli said. “At Hopkins for 11 years we’ve been storing all the cardiology images. The only thing we’re not storing is non-DICOM, which was the piece I was trying to implement.”

Petersilge responded by explaining that the Cleveland Clinic’s approach was to start with the departments that didn’t have support or a long-term strategy for storing images, such as women’s health and ophthalmology.

“By integrating them into the electronic medical record, we’ve been able to raise the standard of their image management to the same as radiology,” Petersilge said. “We’ve really been working our way around the enterprise, trying to raise the level of all of the other departments that don’t have the same sort of support or the same sort of long-term archive. … Cardiology is a very mature department and has a great informatics services. Ideally, we would like them to join in the spirit of enterprise imaging, but they didn’t need the same sort of elevation as a lot of the other departments did.”

Petersilge said that whether or not a facility considers itself as having an enterprise imaging system is dependent on the percentage of images generated across an institution.

“Maybe radiology and cardiology are both going to say, ‘Nope, I’m good,’ but all these other people want to gather together to raise the elevation of their services,” Petersilge said.

Ultimately, Tomaselli and Petersilge agreed that there needs to be buy-in across the system for an enterprise imaging project to be successful.

“If we don’t start applying those same standards to photos and ophthalmology images, we’re going to be way behind when we want to start using AI and analytics on all of the rest of that data,” Petersilge said. “I think enterprise imaging offers the framework to make sure we’re setting the standard for all of our medical imaging data.”