Wanting to make the group accessible to not just directors but all levels of HTM professionals, Nagavalli and Frisch sat down with the group in November 2017 to discuss how they might achieve this goal and provide a forum for HTM professionals throughout the entire state.

After a few more meetings, the organization came to fruition in early fall of 2018, thereby providing New York’s HTM community with a dependable peer network similar to those found in other parts of the U.S. 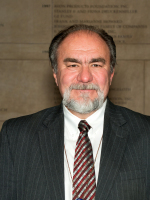 Paul Frisch
“We don’t have big representation of the HTM community, compared to other geographic regions in the country, even though we are one of the leading healthcare providing communities in the Northeast,” said Nagavalli. “The New York metropolitan area has the highest density of HTM professionals and providers. That was the impetus and initial push.”

Nagavalli and Frisch hope to strengthen the status of the society and generate more support by forming affiliations with leading healthcare stakeholders in New York and beyond, as well as other associations, including the Association for the Advancement of Medical Instrumentation (AAMI).

“Ultimately, for the professional side, I’d like the society to have a voice in organizations such as the FDA, or the Joint Commission,” said Frisch. “These organizations periodically solicit requests for participation on new topics that they want to address or regulate, and I think the society presents a voice representing the opinions of HTM professionals within the New York City area, which, in turn, represents a lot of high-end hospitals, and can provide feedback in regard to the pros and cons of how concepts such as cybersecurity should be orchestrated and exercised.”

Upon reaching a certain level of size and stability, the plan calls to engage in formal elections and officer selection. “In regard to leadership of the organization, it is initially starting as a volunteer basis, but would translate into a structured election or selection process as we continue to grow,” said Nagavalli. “I see that taking place anywhere over 12-24 months.”