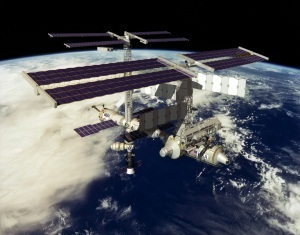 International Space Station
(Photo courtesy of NASA)
One physician in North Carolina has helped push the boundaries of telemedicine beyond our atmosphere — literally — by using it to diagnose a blood clot in space.

NASA recruited Dr. Stephan Moll, a professor of medicine at the University of North Carolina School of Medicine and a co-founder of the UNC Blood Clot Education Program, Clot Connect, to assess one of its astronauts aboard the International Space Station (ISS) after a deep vein thrombosis (DVT) was discovered in the jugular vein of their neck.

“My first reaction when NASA reached out to me was to ask if I could visit the International Space Station (ISS) to examine the patient myself,” said Moll in a statement. “NASA told me they couldn’t get me up to space quickly enough, so I proceeded with the evaluation and treatment process from here in Chapel Hill.”

The clot was the first of any to be found in space, and was discovered when the astronaut took an ultrasound of their neck as part of a research study to examine how body fluid is redistributed under zero gravity conditions. The DVT was asymptomatic, with the individual exhibiting no signs. Neither the astronaut’s name nor the time in which clot was discovered has been disclosed.

With no established protocol for treating DVT in space, NASA reached out to Moll. He and a team of doctors at the federal agency determined a course of blood thinners as an effective treatment. The ISS, however, had only a limited amount of Enoxaparin (Lovenox), a blood thinner injected into the skin. Moll recommended a dosage that would treat the DVT long enough until a new shipment of drugs could be delivered to the ISS.

The astronaut was administered Enoxaparin daily for 40 days. On the 43rd day of treatment, a supply of Apixaban (Eliquis), an oral blood thinner, was delivered and provided to the astronaut for the rest of their treatment, which took more than 90 days. During that time, an earth-based radiology team monitored the blood clot by guiding the astronaut in performing ultrasounds on their own neck. Moll consulted the patient via email and by phone.

"The extreme example of telemedicine for this astronaut — for diagnostic purposes, but more so for management discussion and decision-making — documents, in the extreme, how telemedicine can lead to a solid treatment plan and enable state-of-the-art management even over a huge distance," Moll told HCB News. "It is, therefore, a sort-of poster child, an 'advertisement' and a discussion-opener to create structures in our health care system that make effective telemedicine an easy possibility."
1(current)
2 Deep learning system could save time in scoring coronary calcium

Boston Scientific to acquire Preventice Solutions for up to $1.2 billion total