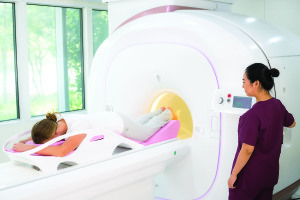 The assessment was made from the findings of 48 centers in the U.S. and Germany who took part in what is described as the first prospective multicenter study of AB-MR, which found additional cancers not detected in patients who underwent 3D mammography. Leading the study was the Memorial Sloan Kettering Cancer Center, in collaboration with an international research team and the ECOG-ACRIN Cancer Research Group.

“This allows us to evaluate the true performance of the test in actual practice and to evaluate if centers can perform AB-MR in less than 10 minutes, and that women tolerate the test,” Dr. Christopher E. Comstock, of MSK and the study’s lead author, told HCB News. “These types of studies are needed when evaluating new tests for adoption and to also inform patients of the risk and benefits when considering whether to have the test. Our study confirmed that AB-MR in women at average risk with dense breast tissue outperforms 3D mammography by a factor of 2.4 times in detecting women with breast cancer. And not only does it find more cancer, but it finds invasive and high-grade cancers not found on the 3D mammography.”

Conventional 2D mammography is limited in its sensitivity for detecting breast cancer in women with dense breasts, which can obscure the presence of tumors during scans. Though 3D mammography has been proved to find roughly 20 percent more cancers, the technology still faces difficulty in identifying malignancies. While able to outperform mammography, digital breast tomosynthesis, and ultrasound, conventional breast MR is not currently recommended, due to its higher relative costs, longer performance time and lack of widespread availability. Abbreviated MR, however, can shorten lengths of time by only showing the most useful of images.

A total of 1,444 women between 40 and 75 enrolled in the trial. All had dense breasts on their prior mammograms and did not currently have breast cancer or any clinical symptoms, such as BRCA status or a family history of breast cancer. The centers screened participants between December 2016 and November 2017 with 3D mammography and AB-MR within 24 hours. All were screened twice, first as a baseline and again one year later, and are now being followed for three years.

Twenty-three women were diagnosed with breast cancer during the first year, with AB-MR diagnosing cancer in 22 out of 23. 3D mammography detected only nine cases, while AB-MR identified all of the cancers found with 3D mammograms except for one early-stage case. It also found an additional ten invasive breast cancers, including three high-grade ones that were not detected by 3D mammography at the time of the scan.

Specificity with AB-MR was 10.7% lower, but that was expected, according to Comstock, who adds that 96% of the women were able to tolerate MR with few side effects. Centers were able to perform AB-MR on average in about eight minutes.

“The results will help to prompt centers to consider offering the test and for insurers to consider reimbursing AB-MR in the future,’ he said. “Our study evaluated cancer detection rates and because MR found additional invasive and high-grade cancers not found on 3D mammogram, it's a strong indication that AB-MR will help to save lives. More formal outcome studies will be needed to evaluate the exact effect the MR had on improving outcomes. Also, cost analysis studies will be useful in comparing this test to current supplemental screening tests such as whole breast ultrasound, which we know to be inefficient and only increases sensitivity modestly.”

The findings were published in the Journal of the American Medical Association.