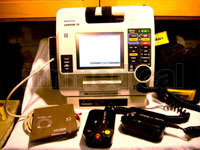 A Life Pack 12
in the company's inventory

Mike Kline and DOTmed Certified Mike Koda, of Minnesota Medical Redistributors, Maplewood, MN, haven't given up their 40-hour-a-week day jobs, just yet. For the time being, they are still working full time as biomedical technicians at a hospital in Minneapolis.

Currently, the partners are like ships passing in the night: Koda goes into the hospital at the crack of dawn and leaves for the company shop by mid-afternoon. Kline comes into the shop when Koda leaves and stays until late at night. The men say they plan to devote more time to their business, once it becomes lucrative enough.

"We started the business when we realized that between the two of us, we could fix almost anything from electrical equipment to cars," Koda says. "And we had no idea there was such a need for medical equipment overseas."

Koda specializes in fixing ventilators, infusion pumps and cauteries as well as surgical equipment. He served in the Air Force for six years where he worked on the B-1 bomber and around nuclear weapons. He also collects and restores antique radios, televisions, cars and motorcycles. "I have also fixed durable medical equipment, wheel chairs, O2 concentrators, nebulizers, beds, and filled oxygen tanks over the years," Koda says. "That's how I got into the medical business."

Kline says the hospital recruited him from industry. He was a field service engineer at Endocardial Solutions for seven years and before that worked in R&D and medical electronics for TSI/VasaMedics, as well as other custom engineering consultants. "They brought me to the hospital to work in electrophysiology. I deal with the really tiny signals, EP, EEG, EMGs, and specialize in patient monitoring, sleep lab, and surgical equipment," Kline says. He also builds robots, and holds a 2006 national Battlebot championship title.

Equipment Being Disposed Of

While repairing surgical equipment at the hospital, both men noticed that systems that didn't work and were of low value were being discarded. They saw an opportunity in fixing and reselling the devices.

"We rescued a culposcope that had been thrown out at one clinic. We repaired it and sold it to a physician's office in Johannesburg," Kline says. "We told the doctor the shipping was not worth the cost, and he said he didn't care, it was for his village."

While Kline says the electrosurgical units they are refurbishing are moving very well, the partners don't have a specific business plan.

"We are able to recognize what a good deal is and jump on it. Our business model is such that we can sit on equipment," Kline says. "Our edge is that we're able to repair equipment by going to the source--the companies that make the components.

"For instance, say a popular medical manufacturer makes a monitor that needs a new inverter board to backlight the display. We can get that inverter board from the OEM who supplies it in China and it's the same part that was originally in the unit, at a tenth of the price. Those are the things we look for," Kline says. "We are really good at second-sourcing and repairing down to component level."

"We like to buy stuff that works," Koda adds. "But if it doesn't, it doesn't particularly bother us. It just means we'll get it a lot cheaper."