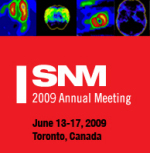 Breaking news on
the isotope crisis
coming out of the meeting
Toronto--DOTmed is reporting from the 56th Society of Nuclear Medicine annual meeting, the world's largest conference dedicated to molecular imaging and nuclear medicine.

DOTmed was on scene Sunday as the Canadian Minister of Health, Leona Aglukkaq, held a private meeting with SNM leaders to discuss the current shortage of Molybdenum-99, the parent isotope of Technetium-99, which is used in conjunction with single proton emission computed tomography (SPECT) scans in oncologic, cardiac, bone and other imaging.

"The Canadian reactor supplies 50 percent of the materials we use. This has been a topic of tremendous concern for us," said Dr. Robert Atcher, former SNM president.

International nuclear reactor operators that supply the global demand for the medical isotopes came together for the very first time in January to discuss the coordination of planned shutdowns, revealed the Minister, who expressed surprise that there wasn't more active communication between suppliers. Aglukkaq recommended an international collaboration between leaders in molecular imaging and health care governance to take on the challenging task of meeting the needs of physicians on the "front line" of the shortage and navigating the complex logistics and international trade issues involved in the medical isotope supply chain.

Aglukkaq named Dr. Sandy McEwan, Director of Oncology at the University of Alberta in Edmonton her special advisor on medical isotopes.

"Some of the issues really are regulatory," said Dr. McEwan, also an SNM past president. "As we attempt to reduce total reliance on technetium we're looking at other alternative medical isotopes. The opportunity to work with Health Canada and, with my U.S. hat on, the FDA, is really important in ensuring the continuation of the service that we provide to our patients."

Dr. Atcher spoke with DOTmed about an email survey that the Society had sent out to its members on Friday requesting feedback on the impact that the molybdenum shortage was having on their practice. Atcher stated that out of the almost 1,000 respondents to date, 90 percent of clinicians confirmed that the shortage was affecting their practice, and about half said that they were operating at 25 to 75 percent normal patient throughput. According to survey results, Practitioners are being forced to cancel or reschedule scans, and if the trend continues, practices may be forced to start laying off technologists.

During the meeting, the Minister discussed the need to streamline the regulatory process in order to provide access to viable alternatives to Technetium-99. Dr. McEwan mentioned the use of Sodium Fluoride (NaF-18) for bone imaging.
1(current)
2