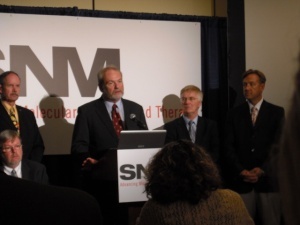 Former SNM President
Dr. Robert Atcher discusses
radioisotope alliance
at this week's meeting
The Society of Nuclear Medicine press conference, held Monday June 15 in Toronto, was an eventful introduction to some of molecular imaging's most exciting new research and technological developments, and a Q&A with members of the media on topics surrounding the shortage of Technetium-99, the essential medical radioisotope currently in short supply.

During the conference, former SNM President Dr. Robert Atcher indicated that the Society had formed an international alliance with governing bodies and corporations involved in the manufacturing and processing of medical isotopes that would meet quarterly to continue to find a long-term solution to the shortage. President Dr. Michael Graham hoped that the medical isotope issue would lead to greater knowledge and technological advancement within the field of molecular imaging.

"I'm particularly honored to take over as president of SNM in the midst of these challenging times. Indeed, with the isotope situation in a state of uncertainty, our profession faces a serious crisis -- one of the most significant in our history," said Dr. Graham. "It is my hope that we will all learn from these dangers and turn them into a world of opportunity and advancements that benefit the patient and community."

The heart of the conference, however, was dedicated to revealing discoveries and new research submitted by members of the Society.

SNM Image of the Year

The SNM Image of the Year Award represents the year's most striking visual case study in nuclear medicine. Since WWII, the field of nuclear medicine has been the source of innovative radionuclide therapies, from the use of radioactive iodide to treat thyroid disease, including cancer, to the advanced radioimmunotherapies that exist today.

The 2009 Image award was presented by Dr. Henry N. Wagner and revealed before and after PET scans of two patients with advanced, potentially fatal non-Hodgkin's lymphoma (NHL). The patients were dramatically cured after intravenous radioimmunotherapy with either Yttrium-90 labeled Zevalin or Iodine-131 labeled Bexxar. Both drugs are FDA approved and combine the cancer-fighting radiation of medical radioisotopes with molecular compounds that are taken up by the tumor cells, making them powerful instruments in the treatment of cancer. Both patients showed no metabolically active NHL in as little as three months of therapy.

"The Image of the Year was chosen because it shows how molecular therapy can cure non-Hodgkin's lymphoma and it provides objective evidence that the patient has been cured," said Dr. Wagner.
1(current)
2
3
4
5