Test Can Predict Who Will Respond to Lexapro, Wellbutrin

Test Can Predict Who Will Respond to Lexapro, Wellbutrin 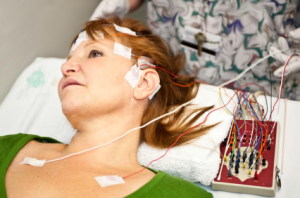 EEG spots early
medication treatment response
A experimental test can accurately predict within a week whether a particular antidepressant will be effective by using brain-wave patterns on an EEG.

"Until now, other than waiting, there has been no reliable method for predicting whether a medication would lead to a good response or remission" and the wait can be as long as 14 weeks, said Dr. Andrew Leuchter, professor of psychiatry at the Semel Institute for Neuroscience and Human Behavior at UCLA and lead author of the study.

The test can be performed in 10 to 15 minutes in any office setting," Dr. Leuchter tells DOTmed News. "The device is based upon a laptop computer with a small EEG interface attached; the equipment therefore is simple and could be widely used," he said.

It is also non-invasive, involving the placement of six electrodes around the forehead and on the earlobes.

These changes precede improvement in mood by many weeks and appear to serve as a biomarker that accurately predicts how effective a given medication will be.

Nine sites around the country collaborated on the trial, which enrolled a total of 375 people who had been diagnosed with major depressive disorder. Each individual was given a baseline QEEG at the beginning of the trial and then prescribed the antidepressant escitalopram, commonly known as Lexapro, one of a class of drugs known as selective serotonin re-uptake inhibitors that are widely prescribed for depression.

After one week, a second QEEG was taken. The researchers examined a biomarker called the antidepressant treatment response (ATR) index--a specific change in brain-wave patterns from the baseline QEEG.

Study participants were then randomly assigned to continue with Lexapro or were given a different drug. A total of 73 patients who remained on Lexapro were tracked for 49 days to see if their results matched the prediction of the ATR biomarker.

As it turned out, the ATR predicted both response and remission with an accuracy rate of 74 percent, much higher than any other method available. The researchers also found that they could predict whether study patients were more likely to respond to a different class of antidepressant, called bupropion, or Wellbutrin XL.

Aspect Medical Systems, a Massachusetts-based medical device company, produced the test used in the study, and must now clear the device with FDA.

He says he is now using the test in studies of other disorders including ADHD, Huntington's Disease, and fibromyalgia. "We hope to be able to help identify promising medications and predict treatment response in these conditions as well," Dr. Leuchter said.