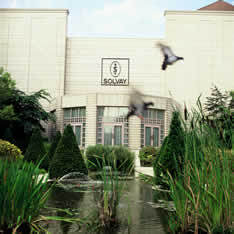 Solvay headquarters
in Brussels
Abbott Laboratories--having scooped up medical device and eye-care companies this year--has turned to fortifying its drug unit with the purchase of Solvay Pharmaceuticals for about $6.6 billion in cash.