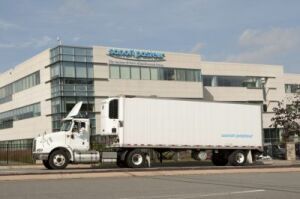 Sanofi ships the first
load of swine flu vaccine
As Sanofi-Pasteur announced it was trucking its first batch of H1N1 vaccines to a U.S. government location, early this week, J&J said it would pay $441 million for an 18 percent interest in Dutch biotech company Crucell NV to make vaccines based on recombinant techniques.

The vaccine arena has given start-ups like Protein Sciences funds to develop recombinant vaccines. In fact, Protein Sciences signed a contract with CDC this summer to deliver its baculovirus expression vector system to produce recombinant vaccines. The government believes DNA-technology will allow scientists to speed up the vaccine-making process and is supporting its efforts generously.

Meanwhile, in another deal reported by the Wall Street Journal, Merck has received marketing rights from Australian vaccine maker CSL to sell its seasonal flu vaccine in the U.S. for an undisclosed sum. CLS is one of five companies supplying the government with a swine flu product.

Before the emergence of H1N1, vaccines were relegated to the backwaters of the pharma pipeline. Now they are hot tickets.

The Journal notes that Merck's Gardasil for human papillomarvirus costs $130 a dose and Prevnar, a pneumococcal vaccine made by Wyeth, costs about $84 a dose.