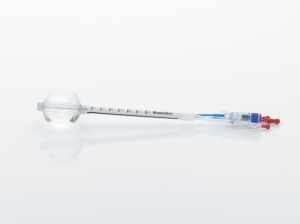 The study sponsored by the American Society of Breast Surgeons involves 1,440 patients who have been diagnosed with breast cancer and who have subsequently undergone accelerated partial breast irradiation by brachytherapy with the MammoSite system. Fifth-year results of the study showed that 96.2 percent of patients were found to have no cancer where the breast had been treated.

"These are excellent results and compare very favorably to results obtained with standard six-week radiation," Dr. Vicini commented. "The significance is that this is the largest group of patients treated with modern partial breast irradiation ever reported."

Hologic is exhibiting their MammoSite Multi-Lumen brachytherapy device at ASTRO this week. DOTmed met up with Hologic Marketing Manager Greg Amante to discuss the MammoSite ML technology and the American Society of Breast Surgeon's ongoing study.

The new MammoSite ML system allows radiation oncologists the flexibility to make millimeter adjustments in the position of the radioactive source. This is good news for oncologists and their patients, because a precisely placed isodose means reduced risk of skin toxicity from radiation exposure and better cosmetic appearance of the breast after therapy.

"From a data standpoint we are very optimistic, but there are some limitations to having a single lumen device," said Amante. "With a multi-lumen device, what we can do now is preprogram multiple dwell positions and it changes the shape of the radiation cloud."

Amante explained that the MammoSite treatment is usually prescribed after lumpectomy to reduce the chance of returning cancer. Prior to treatment, a balloon catheter is inserted through a lateral incision in the breast and stays planted there for the duration of treatment, which takes place in 10 fractions -- two per day for five days. During treatment, source lumen is then inserted into the breast for anywhere from five to 10 minutes and irradiates 1 cm of tissue around the balloon's surface, which is where about 97 percent of subsequent tumors appear.
1(current)
2