Powering Pacemakers With Energy From the Heart 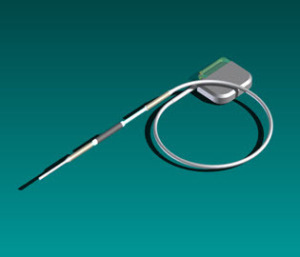 SIMM micro generator
A group of UK-based scientists and entrepreneurs are pioneering a wireless in vivo microgenerator that harvests energy from the heart.

Recently recognized by the Institution of Engineering and Technology with its 2009 Emerging Technology Award, the developers of the Self-Energizing Implantable Medical Microsystem (SIMM) aim to increase the power of implantable cardiac devices (ICD) with a tiny energy harvester compatible with existing pacemaker and defibrillator packages and surgical procedures.

The SIMM gathers power from involuntary human activity, using the differential pressure between the atrium and ventricle to drive the generator and produce electricity. The linear generator fits into a standard pacing lead and can be inserted, positioned and activated using the same procedural steps that are currently used to implant pacemakers and ICDs.

The novel design, which enables functionality without increasing the overall (package) size or placing an excessive energy drain on the heart, represents a significant step forward in patient comfort and surgical adaptability.

Typical pacemaker batteries can occupy as much as 50% of a pacemaker's volume. "Pacemaker device companies would like to put more sensors and features into the pacemaker, but those sensors and features would consume more power and more space. Making the device larger is really not suitable for patient comfort," explained Martin McHugh, business development manager with Zarlink Semiconductor's Advanced Packaging group and SIMM project coordinator. "Making the battery a lot smaller will actually create power and space for enhanced functionality, which would then deliver enhanced features, therapy and sensors."

Developers faced a significant challenge in harnessing energy from the heart's low-frequency vibrations. "Most energy harnessing devices rely on high vibration," McHugh said. "The challenge ahead for the heart is that it is runs at typically 60, 70, 80 beats per minute."

In preclinical testing, the SIMM successfully produced one-third of the energy required to power a conventional cardiac pacemaker.

Subsequent clinical trials have shown that the generator takes less than 1000th of the heart's energy as a power source, and does not add stress to the heart.

Collaborators on the SIMM project include Zarlink Semiconductor (TSX: ZL), Innos, InVivo Technology Limited, Perpetuum Limited and Odstock Medical. The project is underwritten by the UK Department of Trade and Industry, and clinical guidance is being provided through Southampton Hospital.

"Zarlink's role in the project was to leverage our connections with the R&D teams within the various pacing device companies. We have the entire infrastructure to supply the industry, and the microelectronics packaging expertise as well," McHugh noted.

Commercial development of the device remains a future goal. "We continue to communicate with the pacing device companies, and it will be those companies that will decide if and when the technology will make it to the market. We will carry on with its development, and I think in a couple of years' time, we will have to transition the technology into device manufacture," he posits.