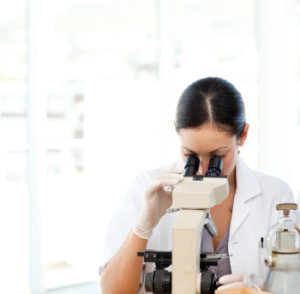 Researching a medical
alternative to stents
Patients with narrowed arteries who don't qualify for drug-eluting stents could have their ailing blood vessels aided by teams of sticky nanoparticles, dubbed nanoburrs, according to a study published this week in the Proceedings of the National Academy of Sciences.

Like burrs, the seeds that get caught on your clothes outside, "nanoburrs" bristle with tiny hooks, making them adept at clinging to exposed surfaces of wounded arteries. When ferrying an anti-proliferative drug, the 60 nm-wide nanoburr could help people whose arterial lesions' number or size make them inappropriate for treatment with stents. It could also be used as a back-up for drug-eluting stents by delivering the drug to regions surrounding the stent struts.

"There may be some instances when a drug-eluting stent is less suitable for a patient," Juliana Chan tells DOTmed News. Chan is a Ph.D. student in biology at MIT and co-author of the study with Omid Farokhzad, associate professor of anesthesiology at Harvard Medical School and Robert Langer, a professor of chemical and biomedical engineering at MIT.

Patients often denied treatment with drug-eluting stents include those with renal failure, those with arterial lesions bigger than 3.5 mm or smaller than 2.5 mm, those who need multiple stents in a single artery, and those with so-called bifurcation lesions, where plaque builds up at the site where the artery splits in two, which is where the stent is less easily crimped, according to Chan.

The nanoburrs latch onto injured arterial walls because they're decorated with peptides pulled from bacterial phages, viruses that infect bacteria. The researchers combed through a phage library, screening for a peptide that would help the burr stick to arteries, and they found one: a peptide that latches onto the collagen that makes up the basement membrane of arteries. What makes this peptide useful is that it preferentially binds to the basement membrane of the artery wall that gets exposed whenever the artery is injured, such as during an angioplasty, where the inflated angio balloon squeezes against the arterial wall, pulling off the top layer of cells.

The nanoburr's stickiness means these tiny hybrid-polymeric particles are much more likely to hit the treatment target than nanoparticles lacking the protein hooks. In the current study, done in both arterial cell cultures in a dish and in the carotid arteries of living rats, the burred nanoparticles were between two and four times as likely to glom onto injured arterial tissue as non-burred varieties.
1(current)
2
3