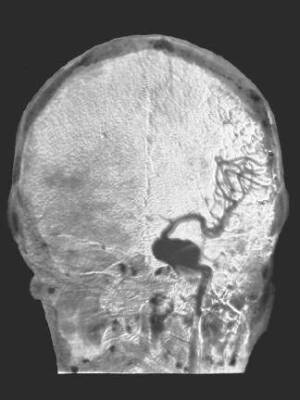 A brain aneurysm
IBM and Mayo Clinic have teamed up to develop new technology that helps radiologists detect brain aneurysms with greater speed and accuracy.

"For a fair number of people, the first time they find out they have an aneurysm is when they die from it," said Mayo radiologist Bradley Erickson, M.D., senior author of the study and co-director of the Medical Imaging Informatics Innovation Center at Mayo Clinic.

To improve the process of detection, researchers employed noninvasive magnetic resonance angiography imaging technology and developed an algorithm that performs so-called "automatic reads" on those images. The algorithm sorts and analyzes blood vessels based on qualities like geometric properties, location, and the speed of blood flow through different areas.

"We're starting to use machine learning methods where we provide it with a number things that may be of use in diagnosing things like this; properties like shape, location and intensity. Then the machine algorithm uses that to say 'Hey! That might be an aneurysm,'" Dr. Erickson explained.

From the time an image is taken to the time it is ready to be read by a radiologist, there often is only a 10-minute window. In that 10 minutes, the new workflow is able to identify images coming off of the scanners and route those related to the head and brain through the special workflow, which then conducts automated aneurysm detection. On average, this can be done within three to five minutes, while the more invasive digital subtraction angiogram, which carries risks of neurological complications, usually takes about an hour.

The new analytics technology also has a proven accuracy rate in detecting aneurysms - even small ones less than 5 mm - of 95 percent, compared with 70 percent for manual interpretation. According to Dr. Erickson, that accuracy rate comes thanks, in part, to the Mayo Clinic's large database of cases with known diagnoses, which researchers used to help train the algorithm.

While the testing carried out so far has been fairly laboratory-oriented focusing on Mayo's database of cases, researchers have now gotten approval from the Institutional Review Board to essentially simulate clinical practice in a double-blind study.

"The way most CAT algorithms work is that it puts markers on suspicious regions, but it still takes a human to identify whether it's an aneurysm. Currently, when we identify up to eight hits, we will find up to 95 percent of aneurysms. The next step is when humans review those spots and are asked to make a decision on whether these things are aneurysms, we need to see how many they correctly identify," said Dr. Erickson, who explained that too many positive identifications could prompt radiologists to reflexively schedule more invasive catheterizations than needed.

Dr. Erickson pointed out that this is just one of the first developments to come out of Mayo's two-year-old partnership with IBM and said there's much more coming down the pipeline.

In the future, Mayo Clinic expects to use the same approach for other radiology detection tests such as the diagnosis of cancer or vessel anomalies in other parts of the body.