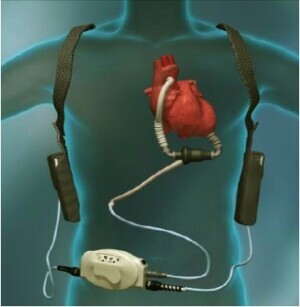 An illustration of the HeartMate II
The Food and Drug Administration has approved an artificial heart for permanent therapy in patients with advanced heart failure. Developed at the Texas Heart Institute (THI) at St. Luke's Episcopal Hospital in Houston, the HeartMate II continuous-flow left ventricular assist device (LVAD) is designed to provide long-term cardiac support for male and female cardiac patients.

An earlier version of the device was approved as an interim or "bridge" device for use in patients awaiting heart transplants. The approval of the HeartMate II provides an option for those who either cannot survive the long wait for a successful donor match or who are ineligible for a heart transplant.

"Now, patients can get an off-the-shelf, new generation LVAD without having to enter a controlled trial and without having to be on the transplant list," said cardiologist Dr. Reynolds Delgado, Medical Director of Mechanical Support Devices in Heart Failure at THI. "That breaks down the barriers so that someone can, in a moments notice, get this latest, greatest device without having to jump through big hurdles. It opens it up for broad usage."

With a markedly smaller size than prior devices, the rotary pump HeartMate II requires much less invasive surgery. "This is basically a D cell battery size pump that has one moving part, which makes it very durable. It can last five-plus years." Delagado explained. "It can be implanted relatively easily compared to older devices because you don't have to actually open the sternum to implant it. Techniques are being developed so they can be implanted without the use of a heart lung machine. It's a major advancement in artificial heart technology. It's simple, quiet, small, relatively low power utilization, and patients can really have a good quality of life with it."

"It's a big advancement. If you look back at the original concept of the artificial heart in the 1960s and '70s, the Kennedy administration first put out the requirements for a total artificial heart and those have never been met until now. The requirement was essentially to have a heart that would last over two years and would allow complete mobility, and this is it." Delgado notes.

Doctors at THI have discovered an additional benefit of the latest-generation LVAD: remarkable efficacy in pediatric cases. "The really interesting thing is that in younger patients, especially kids, if you put this device in and leave them alone for six months, their heart can actually recover completely. That's an amazing finding," Delgado revealed. "It was traditional thinking that once the heart is damaged it cannot recover or regenerate itself. It was thought that only the liver could. Now, we found that the heart does too. It's done that in about 25 patients now where we can actually take it [the LVAD] out after six months."

The approval of the device underscores the longstanding historical link between THI and milestones in heart transplantation. THI's founder, Dr. Denton A. Cooley, launched the institute in 1962; seven years later he became the first heart surgeon to implant an artificial heart in a human being.

The enormity of the achievement is not lost on Delagdo. "We went to the moon in 1969, but it took until 2010 to do this," he marveled.

The HeartMate II is manufactured by the Thoratec Corporation of Pleasanton, California.