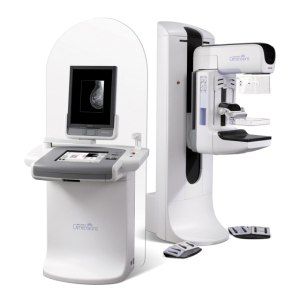 The Hologic Selenia Dimensions
2D full-field digital
mammography system offers
superior image quality
and can be
configured for 3D
breast imaging when
and if breast
tomosynthesis is approved
by the FDA.
This report originally appeared in the May 2010 issue of DOTmed Business News

One out of every eight American women will develop invasive breast cancer at some point in her lifetime. Responsible for claiming more than 40,000 lives in 2009 alone, breast cancer continues to pose a serious threat to women's health.

"Mammography is our best screening tool for the early diagnosis of cancer," says Dr. Gary Levine, director of breast imaging for Hoag Breast Care Center in California. "The reason that it's important is because when we detect breast cancer early, it's extremely treatable and usually with very limited surgery. Early detection is absolutely vital."

But it takes a lot to stay on top. The industry has made the effort to do so in the past couple of years, including the transition into the digital realm. Today, more than half of the nation's breast imaging facilities have digital mammography units.

"The market is about 65 percent converted at this point," says Andrew Vandergrift, national marketing manager for women's health for FUJIFILM Medical Systems. "There are about 12,500 mammography units in the country and about 65 percent of those are digital today."

Digital mammography is considered advantageous over film because it allows for space-saving data storage, image manipulation, improved imaging of denser breasts and the ability to share images and discuss treatments or concerns with remote colleagues.

A recent study published in the American Journal of Roentgenology found that digital mammography delivers less radiation than film. Researchers analyzed data from 5,102 women, who were screened using both types of mammography. On average, breast radiation dose per view was 22 percent lower for digital than for film mammography. The study also suggests that the radiation reduction could be greater for women with larger, denser breasts.

With the given benefits, it is no surprise that digital systems are preferred by breast care facilities nationwide. And analog systems are noticeably losing their appeal.

"Sales in digital mammography have slowed somewhat due to economic conditions and the degree of market penetration," says Pat Hall, director of product communication and professional relations for Hologic. "Few analog systems are sold in the U.S., as most system replacements are digital."
1(current)
2
3
4
5
6
7
8